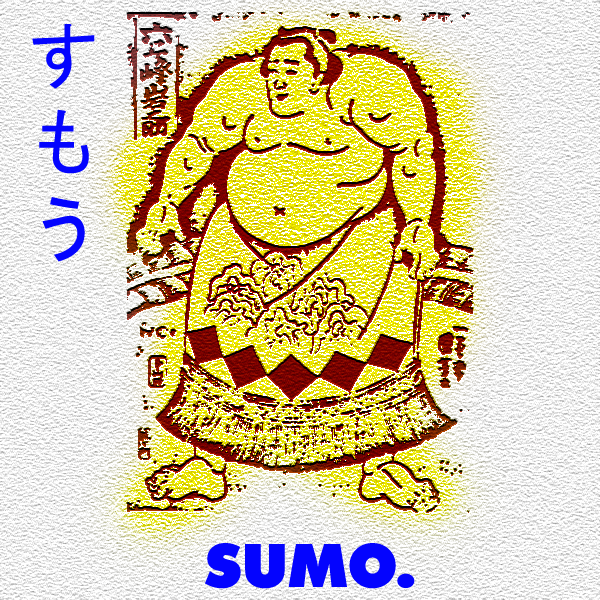 You could say that Sumo is “Japanese Wrestling.” But this would only be right if wrestling involved a Catholic Mass and the pretext that the cage match was to entertain Jesus.

The Sumo Ceremony
Like much of Japanese life, Sumo consists of extravagantly long bouts of formal ceremony leading up to short bursts of real activity.

Originally, Sumo entertained the Gods during regional Shinto festivals. The ceremonies of Sumo are still about two-thirds of a Sumo bout.

Matches begin with a formal procession of wrestlers wearing ceremonial silk gowns and whose names are read by a referee in a specialized voice. Then, the Yokozu-na, or grand champion, comes on stage and swings a 25-pound hemp knot, tied in the way Shinto shrines use to demarcate places of awe.

The wrestlers perform ceremonies. They raise their arms and stomp on the ground to frighten away negative kami. They drink water to purify their bodies and throw salt to purify the circle. There is chanting between each tier’s competition, and a ceremony of watering the circle in a kind of hypnotic spinning motion.

All of this ceremony is occasionally broken up with wrestling.

Sumo as Sport
Sumo is about throwing your opponent out of a 15-foot-wide circle. Any part of the body on the ground or out of the circle qualifies. Wrestlers have 4 minutes per round, and spend most of that slapping their chest, throwing salt around, aggressively squatting and getting ramped up.

After about 3 and a half minutes, the two mountains of manflesh dash at each other head-on. The match usually ends within 15 seconds. There is no “best out of three” mentality to Sumo. All of this buildup is for 15 to 30 seconds of war.

And it is war. I saw wrestlers flung from the circle into chairs twice. The occasional lock ends with two men furiously thrusting at each other to drain the other’s balance. Salt, water and hazelnuts erupted in a glorious spectacle as one man was sent rolling over the ceremonial corner of the ring.

Sumo Rankings
Size doesn’t matter, since there aren’t weight divisions. A wrestler weighing 380 pounds may seem to have an advantage, but the nimble, light-weight guys were usually victorious.

Matches go on for 15 days, and every wrestler faces each other. Winning the title is different from being named Yokozu-na. The Yokozu-na is determined by judges after a wrestler wins two matches in a row, and includes evaluations of character. Only 68 wrestlers have ever been named Yokozu-na, and only one of them is wrestling today. Once you are a Yokozu-na, you can’t lose it.

Sumo Training
The training process for Sumo begins at age 15 at a communal training center, or stable, where you join as a lower-ranked wrestler with cleanup duties and other menial tasks, which is common in any traditional Japanese craft (consider Sushi chefs). Life is not pleasant.

Wrestlers eat high-calorie meals of a special kind of Nabe (a soup), washed down with bottles of beer. Apprentice Sumo serve their masters and are left only with the leftover Nabe. This nugget sums up Sumo life with a somewhat amazing tidbit (emphasis mine):

“Apprentices live a spartan existence, training, sleeping and eating twice daily a fattening broth in a sort of monastic collective that has few parallels in professional sport. Until the association recently outlawed it, discipline was enforced with a yard-long bamboo stick. Stable masters oversee strict hierarchies, only slightly exaggerated in the widely believed rumour that apprentices wipe the bottoms of the older wrestlers. “That used to go on, but it has been stopped,” says Kotooshu.”

This kind of anarchy is limited once you enter the ring. Then, it’s 4 minutes of staring at each other before lifting a finger.

The End of Sumo
Like a lot of traditional arts in Japan, Sumo is seeing a rapid decline in audience and participants. Perhaps because of the “softening” of Japanese youth, or absent Japanese youth, Sumo must look outside of the country for its wrestlers. And the lack of any Sumo tradition outside of Japan means a dearth of available talent.

Add to this a string of scandals – from gambling and organized crime ties (our tickets literally said “No Gangsters” on the back) to the death of a 17-year-old apprentice and you can see the loss of Sumo’s luster.

Can Sumo survive? It’s possible. But faced with an aging population, Japan as a whole is struggling to find the best path to survival. Should Sumo relax its rules against foreigners? Part of that debate mirrors a broader discussion of immigration, which the country is ignoring for the science-fiction fantasy of a robotic Japan.

Will we see robot sumo alongside electronic waitresses and cybernetic housekeepers? God, I hope so.

This entry was posted in Shinto, Tradition. Bookmark the permalink.

4 Responses to On Sumo | すもう