On Being a Crow in Japan 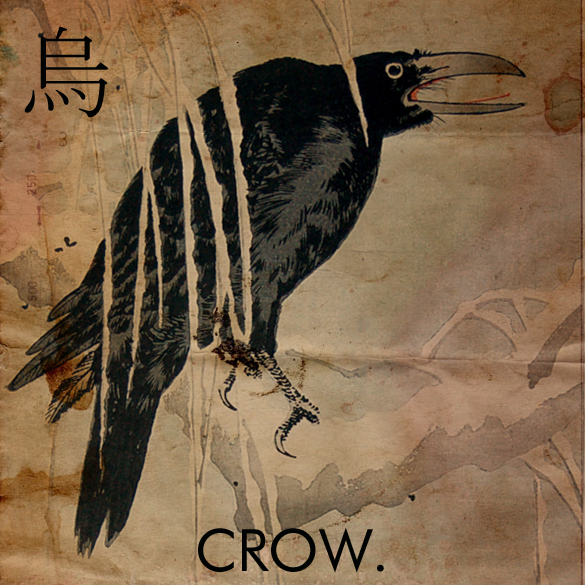 Shortly after moving to Japan I began having a dream that would recur for the duration of my time there. There were minor variations, but the story was always the same: in the dream, I would suddenly remember that I had a cat.

I had somehow misplaced my memory of its existence for weeks; upon recollection I would go searching for the animal—or its body—in dread, expecting it, if not yet dead, to be a living skeleton, having gone for so long without being fed. And then I would open a closet door, or go around a corner, and there it would be, just as healthy and alert as I’d left it.

If you ascribe to the Jungian theory that all characters in a dream are projections of oneself, the obvious interpretation is that the neglected cat was actually an aspect of myself I was starving. Creativity? I wondered. I was going for long stretches without writing, all psychic space now dedicated to adapting to a foreign culture.

After I returned to the U.S. the dream stopped. A friend proposed that the cat was not merely an aspect of myself but my whole self, which had been to one degree or another smothered for my entire three years abroad. What I like most about cats, my cat in particular, is that they are wholly themselves; they do exactly what they want and then look at you with a blankish deadpan expression: What?

Unself-consciousness is characteristic of all animals, as far as we know; that’s what makes them not us. I admire it in all animals as though it were their choice, and I’m frustrated with myself for not having it, as though that were my choice.

Corvus Japonensis
There are no crows where I grew up, so the Japanese jungle crow was my first experience with the species. Corvus japonensis commands attention. They are massive, shiny black with long, thick bills, and scream constantly from every treetop and telephone wire. Their caw is throaty, repetitive, comically obnoxious, and the crows bob their heads up and down with each croak as though to emphasize a point. They soar downward cleanly but struggle upwards, flapping their wings with what seems significant strain.

Crows, in the narrative I created for them, like to take it easy. They’re social and hold huge convocations over the towns. I liked to think that the crows, like my Japanese co-workers, held morning meetings every day. (“What should we do today, crows?” they’d ask each other. “Oh, just crow around.”) I can’t identify the precise moment that I became fixated on them, but I did notice my boyfriend at the time becoming annoyed when, on our walks to the train station, I’d get distracted from whatever subject he was holding forth on by a dark swoop across the path. We saw a huddle of crows once on the tracks, munching on the carcass of a cat that had been hit by a train. I found their grossness funny; they were so unapologetic.

Like all animals. But across mythologies, you will find a role for the crow. He is an omen of death. He carries the souls of the dead to the next plane of existence. He is a trickster, or a messenger, or even creator of the world. Japanese Shinto has karasu-tengu, half-crow, half-human goblins, and yatagarasu, a three-legged crow whose appearance is evidence of divine intervention. (And the emblem of the Japan Football Association.) Crows abound in ukiyo-e, and a particularly nurturing one is the star of a Japanese children’s song, “Nanatsu no ko,” about a mother crow looking after her seven lovely crow children.

As though to balance out their absurd squawking, the nuisance they cause when they dig through trash bags left on balconies, and their lowly scavenging, crows possess a dignity backed by thousands of years of reverence across cultures—and by their high intelligence.

Looking into their impenetrable black eyes, it was easy to believe they knew something I did not. Unlike me, they adapted easily. Rather than be pushed out by the sprawl of Japanese megalopolises, they thrived. They learned how to use cars to break open nuts. They stole the wire hangers people took home from the dry cleaners for their nests. They outsmarted the “Crow Patrol” in Kagoshima—when representatives from Kyushu Electric sought to cull the local population, the crows built dummy nests.

The poet Ted Hughes’ Crow, who gets his own book, seems like the Native American creator of worlds merged with the trickster archetype, a nightmarish rebuke to God:

Flying the black flag of himself. 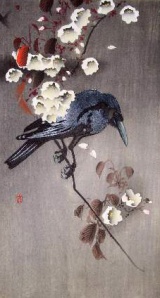 Japan is not a country that encourages flying the flag of oneself. “The nail that sticks up must be hammered down” is the Japanese saying perhaps most often quoted by expatriates as evidence of the country’s will to conformity. (Or harmony.) The inescapable blatancy of my status as a visitor made me want to condense down the more raucous bits of my personality as much as possible. Minus wit and opinions and all the other carefully cultivated pieces of selfhood, I transferred these qualities to the crows: They were my spirit animals, I decided. I appreciated them more than anyone else did.

When my parents visited, I drew their attention to the dark flapping in a tree, like a breeze made solid: “There they are!” I said, as though pointing out something I’d accomplished, or something I was. Like they were the parts of me that ripped away from what was hammered down, to make room for Japan, or for the boyfriend, who wished to follow the example of Stephen Dedalus in Ulysses, saying to the demands of the culture, “Non serviam.” I felt implicated by this. I worried I was insufficiently vibrant, in how quickly I could mold myself to a new system of behavior.

I’m not everybody’s cup of tea, I’d once thought of myself, proudly. In college, I looked down on the people who didn’t make apparent to all those around them the bigness of their personalities, shrugging off those who couldn’t tolerate my “honesty,” storming off in rages from debates that had begun as idle chats about pop culture. The same way I later believed, though I knew everyone in love believed this, that my connection was deeper than every other poor delusional couple’s, went beyond connection, shooting into some mystical realm. And yet this rollicking song of myself had been muffled so easily for the sake of getting along with some co-workers. Looking back on what I’d thought made me me was like remembering through hangover blear your antics from the night before, hoping the others hadn’t already seen what you were now seeing in hindsight.

Crows, too, went up and down; attracted with their noise and spastic soaring an amused irritation. But one particular ukiyo-e, of a crow perched silently on a branch, black plumage peeping through cherry blossoms, revealed something I felt as well, a still center that went unseen in all other outward iterations. I got it tattooed on my shoulder ten days before I left Japan, as a reminder of a core that did not move.

Remembering Japan now creates an almost schizophrenic feeling. The experience is close, time-wise, but also permanently walled off. “I have led several lives and I still lead some of them,” Renata Adler wrote in the novel Speedboat. I’m definitely not leading my Japan life anymore. There’s no one around here who experienced it with me, and no continuity between that three-year period and whatever phase I’m in now.

I used to sit on my balcony watching the crows circling, telling myself “This will all be a memory someday,” but I was never really convinced. But I think I’ve learned that no matter the milieu, a constant remolding of the self is asked of us; the extent to which you compromise what you believe constitutes the essence of you may be something over which you don’t have total control. Are the selves we were still stashed inside us, like Russian dolls? Can we communicate with them? The crows, as beings that don’t bother with these questions, that live in a constant present, are emblems of what I sometimes yearned toward in Japan, and now too, and remain entirely unattainable.

Alanna Schubach is a former expat in Japan and the current editor of Such Sweet Thunder, a journal dedicated to the emotional connections we form with music. She has written before for This Japanese Life, “On Being Alone in an Office in Japan.”

And God, disgusted by man, turned to This Japanese Life on Facebook.

This entry was posted in Culture Shock and tagged crows, expats, japan. Bookmark the permalink.

4 Responses to On Being a Crow in Japan