On Diving from a Malaysian Oil Rig 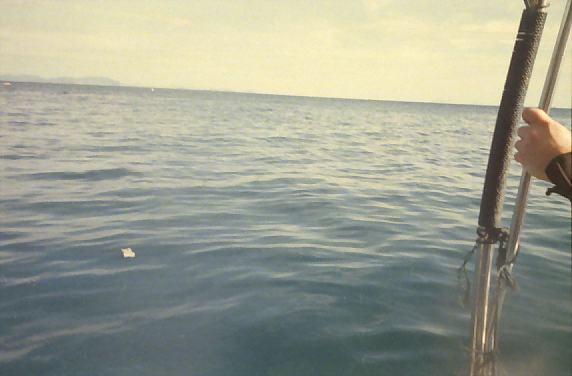 When I was a kid I dreamed about flying.

It was always simple in dreams. I’d wake up with the euphoric feeling of having figured something out: The secret to flying was to jump, then repeat the jump while still in mid-air. The younger me would attempt this repeatedly, the older me would let the dream die and go brush my teeth.

Somewhere in my subconscious, there’s a pile of failed flying strategies. I remember sitting on a chair tied to a rope, and then pulling the rope, perplexed by my failure (I still can’t really explain why that doesn’t work).

The young scientist would take to the water and study the floating sensation, trying to reproduce it on land, seeking the holy grail of buoyancy.

Standing underneath a Malaysian oil rig some twenty years later, I’ve finally got it sorted.

Turtlegeist
On paper, sleeping on a decommissioned oil rig off the coast of Malaysia may look like your life has gone horribly awry, the end result of finding a suitcase full of cash or putting a vital organ up as collateral in a poker game with Kazakh gangsters.

It’s actually the best vacation you can have in Asia.

Yes, sometimes my nose was filled with exhaust fumes or the oily grease from the freight elevator and my feet were caked with black residue every night. But all that was a small price to pay for a captivating and beautiful diving experience.

Most people don’t visit Malaysia for the palm oil industry or the shark teeth traders. The lure of the seaside is the island of Sipadan. It was once called the best diving in the world by Jacques Cousteau, who made a film about the place in 1989 called “The Ghost of the Sea Turtle,” which I hope is a schlock-horror film about the world’s slowest poltergeist.

Sipadan, Cousteau said, was “an untouched work of art.” It’s the result of coral growing on the caldera of an undersea volcano and hosts about 3,000 species, which made fish spotting almost frenetic.

The rig has a house reef and is surrounded by ocean, so even my “controlled water dives” were in real reefs, far superior to the poor suckers in the PADI training DVD’s who were hanging out in swimming pools until their third or fourth dive.

Cut My Line, Set Me Free
I rolled backwards from a boat and was suddenly underwater, breathing.

You’re trained to breathe through your mouth and out through your nose, which clears water from your mask, which you’ve spit-polished at the surface to avoid fog.

You are instantly immersed in water and bizarre animals: Chocolate-chip starfish, pufferfish, sea turtles and underwater snakes pay absolutely no attention as you come to a graceless thud upon the ocean floor. The short hiss of your air regulator alternates with the sound of bubbles flowing to the surface.

Aside from the low rumblings of the occasional motorboats or the squeaking sound of pressurizing ears, all you can hear is your breath.

Which is a crucial aspect of diving. Not just because you’d die without it, but because movement underwater is so dependent on your lungs.

And bubbles are cool. Through plastic and saliva, I saw the silver half-circles of exhaled air escaping from other divers, rising to the surface like jellyfish. With enough people it’s like floating in Alka-Seltzer. Poked bubbles stay intact, slipping around my fingers like blobs of mercury. 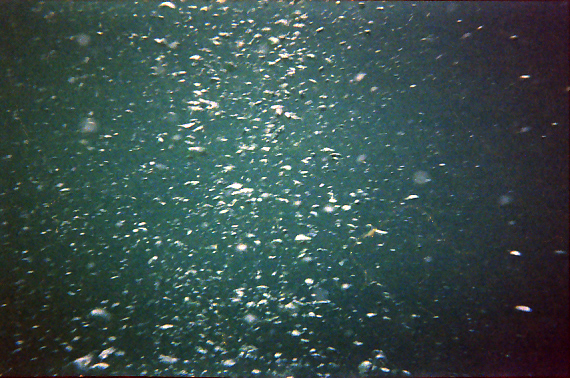 Your lungs become legs – or elevators – controlling your vertical position. Exhale and hold your breath and you’ll descend, inhale and hold and you’ll rise. This made breathing confusing, and sometimes I floated off as though I’d had too many Fizzy Lifting Drinks in the Bubble Room.

But you’re flying. The controls were surprisingly intuitive, shockingly reminiscent of those boyhood dreams where I jumped and then jumped again while jumping. That works underwater, and if you are in an artificial reef you can fly over houses and machines and feel like you’ve suddenly made your inner 9-year-old really proud, so proud, in fact, that you will probably pee your pants, but perhaps that is not from joy so much as the salt water and the pressure of the sea upon your bladder.

I’ll Be the Lost Sailor
Writing about the world under the sea is a lot like writing about dreams. It’s difficult to relate to the experience without having been there, and so these vivid and surreal experiences get reduced to some simple common vocabulary. Choose your own awkward metaphor: A snowstorm of fish; standing next to wallpaper made of fish; replacing your eyeglasses with a fish, etc.

Trumpetfish, starfish, squirrelfish, dogfish. The Celebes Sea can append the word “fish” to any noun you can think of and make it into a real thing.

So, yes, I saw a lot of fish. I saw walls of rock and discarded house frames coming to life thanks to coral and anemones. I saw an octopus change colors three times. I saw a sleeping shark. I was nearly grazed by an indignant sea turtle. I was surrounded by a tornado of silver scales and hung upside down to look at a grouper the size of a German Shepherd. I was glared at by a barracuda and smiled at by clownfish.

I don’t know what the trumpetfish was doing, but there is a thing called a trumpetfish down there, hanging out looking like a trumpet.

I Want To Live In a Bathysphere
This isn’t what Jacques Cousteau wanted me to get out of my Sipadan diving experience, but now there are lots of things I’d like to someday throw into the sea.

I’d like to see my doomed 2002 Hyundai Accent – rotting away in my parent’s driveway – covered with pink and yellow anemones standing guard over yellow and white clownfish. Let’s throw a shopping mall under water! Escalators caked with barnacles, sea fans stretching out on clothes hangers, sea turtles resting in elevator shafts.

Beneath the rig, a giant steel letter “A” was being devoured by coral. The fish are living among pneumatic tubes and pipes once put to some unknown but undeniably filthy industrial purpose, resurrected as the skeleton of some oceanic cyborg.

The take-home message of the diving rig seems to be that whatever we throw into the ocean will become beautiful eventually. Let’s not take that lesson too seriously, I guess.

Like a Fish in a Goldfish Bowl
No one seems to talk about the sensual experience of diving. It’s hallucinogenic: Your body moves differently, your perception of time goes faster, internal body parts start moving you. Clumsy land-lubbing metaphors only go so far toward an accurate description; they are the linguistic equivalent of wearing diving fins on land.

When I closed my eyes at night, I could feel myself rising and falling with my breath. I saw a treehouse with a giant fish tied to it for use as a staircase. It would seem there is something about a fish that taps into some fundamental starting strand of our DNA. We were fish once, after all; somewhere in our genes is all the information we would ever need to become a fish, just outpaced by evolution and outdated by our bodies.

And yet, the human body does not become more beautiful under the sea. Salt water and pressurization do all kinds of awful things that nobody ever tells you about. Water seeped into my body and turned me into a sagging prune of flesh. Divers have to pee so badly that everyone openly urinates through their swimsuit and into the sea (No wonder the turtles are annoyed). You spit on your mask to stop the fog; snot and phlegm get hucked up through your nostrils and form green strings across your face.

At night, you’re forced into the heavy toil of rig life, which involves eating too much delicious food, drinking reasonably priced beer and listening to awesome Malaysian guys cover Bon Jovi songs while you play board games.

If the generator is working, you’ll lie your head down in an air conditioned room to the distinct sensation of rising and falling with every breath, and see fish coming through the darkness of your eyelids to carry you off to sleep.

Peeing in your pants is a small price to pay.

I’m back above sea level in Japan, and always over at This Japanese Life on Facebook.

4 Responses to On Diving from a Malaysian Oil Rig