On Life Outside the Palace

None of us would want to swim in the lake where Buddha was born.

Lumbini is a last stop in Nepal’s Terai Valley, just before the Indian border. It’s a farming valley, and where there is not rice or mustard crops there are marshes giving birth to legions of mosquitos.

We foolishly visited the region to see the birthplace of Buddha, despite lacking any prevention against malaria, a problem we solved with turtleneck sweaters, DDT hand cream baths, and a strict 4:30 p.m. curfew in a hostel with only a ceiling fan to keep us entertained – when we had electricity.

Lumbini’s central site is a kind of Epcot World Pavilion of Buddhism, with monasteries and monuments built by, and in the architectural style of, almost every major Buddhist country on Earth. They surround the tree and small lake where Maya Devi stood when giving birth to Prince Siddhartha. 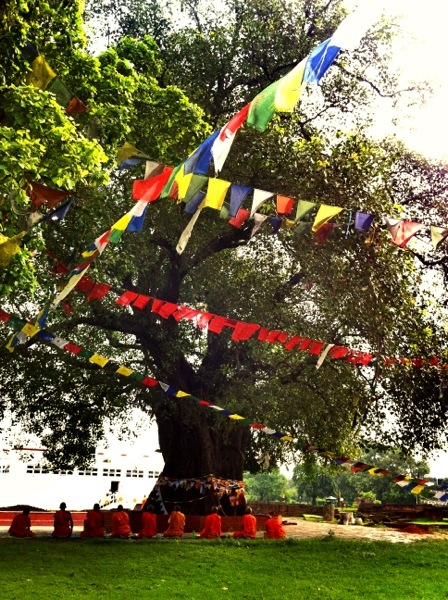 My mind, however, is wandering back to the I-95 rest stop in Kennebunk, the Golden Pavillion of public rest areas on Maine’s Gold Star Highway.

The Interstate
The place is perpetually bright, with gleaming white polished-granite floors. There are no less than three flat-panel televisions mounted around the circular dining area, with a full sound system. Surrounding these tables is a 24-hour Pizza Hut, Burger King, and Popeye’s Chicken – a Starbucks and convenience store close at 11 p.m.

There are vending machines that dispense ice-cold cans of water, soda and juice; others offer candy and snacks. There are toilets, too, kept clean by paid staff around the clock. The urinals are flushless, but the toilets dispense the same water as the sinks, where you can wash your hands with provided soap. Excepting the unsavory residues lingering rim side, the water in the toilet is clean enough to drink. The stop also provides its own toilet paper.

Gasoline, like the electricity, never stops being available to travelers.

I’m thinking about it often because any single aspect of the Kennebunk Rest Stop is simply unreachable in Lumbini, and comes at great expense in Kathmandu. Shops and convenience stores here are open-air garages, with steel doors that roll down in the evenings. Electricity isn’t present except for a handful of “cold stores” which use it to power a single cooler.

Bathrooms are outside or drain into troughs; a bucket and a hose replaces toilet paper. People don’t hand things over with their left hand because that is the ass-cleaning hand.

This is the birthplace of Buddha.

Life Outside the Palace
The birthplace of Buddha is not particularly remarkable, because Buddha spent the next 29 years of his life sheltered in a luxurious palace, prince of Kapilavastu, now known as an area neighboring Lumbini called Tilaurakot.

There, Prince Siddhartha was pampered in deliberate ignorance by his father in a bid to make him a great King rather than a great teacher, the fate given to him by a seer.

Only after venturing out of the castle did the prince encounter the poor, the sick, and the dead.

Sunauli
A hostel set us off on a bus to Lumbini that ended up being a bus to Sunauli. As is typical when leaving a bus in Nepal we were enveloped in a storm of street hawkers, rickshaw drivers, taxi drivers, guest house peddlers, would-be guides, and questionable holy men selling marigolds.

In the midst of the crowd and the clamor was a young girl of about 9 years, who tugged on my shirt to ask for money. The crowd narrowed as we dismissed pleas from violin salesmen and rickshaw drivers and I noticed that the bundle in the girl’s arms was not a doll, as I had assumed, but quite possibly a dead baby.

Street Kids
Street kids in Kathmandu seem almost desperate to resist your sympathy. They ask you for whiskey, huff paint on the same streets they beg on, ask for money by slapping your pockets.

Most child beggars, though, at least in Nepal, are operating in gangs lead by an adult at best and, at worst, on the orders of scam orphanages.

In the past, these orphanages recruited children from poor villages, promising parents quality educations and opportunities in Kathmandu. The orphanages would then turn around and provide these kids to well-intentioned Western couples who wanted to adopt them – a scam that earned these orphanages thousands of dollars in fees. It was unscrupulous, but one could say that the children, at least, ended up in loving homes- and with real educations and opportunities in Western countries.

Voluntourism
Search for “voluntourism” on Google and you’ll find plenty of opportunities to pay money to charitable organizations for the chance to do some good in the world.

Well-meaning and well-heeled Westerners often do this kind of work after graduation, and typically understand that the fees offset the considerable cost of hosting a short-term volunteer.

In truth, voluntourists may end up in orphanages where the children have parents and conditions are kept intentionally squalid to encourage the volunteer to contribute further after their departure, or to encourage others to volunteer or donate.

This has been a huge problem for Nepal’s Central Child Welfare board, which lists most of the 445 (!) orphanages in Kathmandu as low-grade and potentially dubious. In response, NGO’s have avoided funding Nepali orphanages, and most voluntourism activities are handled and arranged by travel agencies rather than charities.

One of the tasks a child in an orphanage may be given – particularly if they are injured – is street begging. The money is then collected by adults at the orphanage. Various levels of shell games exist: coordinated with local markets, kids may use tourists to buy high-priced milk at a specific shop, which then offers the orphanage a kickback on the profits, for example. The same goes for toys or candy.

You have to wonder, despite the shock, if a 9-year-old girl in desperate need of help would make a tourist bus station her first destination; if she would deliberately only seek out white tourists who don’t speak her language. The answer is that she wouldn’t, that this was an orchestrated conspiracy that preys on the best impulses of humankind.

Boycotts
The central force behind all profitability is supply and demand, and child exploitation isn’t an exception.

Nobody would buy an “I Heart Nepal” T-shirt knowingly produced by an exploited child, and likewise, neither should we buy the “product” of begging children.

This sounds, and feels, inhuman. We want to do the right thing, we want to help the orphanages. We feel good when we fundraise from friends and family, when we connect with children and use our wealth to improve their lives. We want to soothe our conscience by putting money into the hand of a begging child.

This feeling of doing the right thing, however, through the force of a dark human ingenuity, is precisely the illusion that child begging rings are selling.

When we hand 500 rupees to a child with a sick baby in her arms, these guys profit, and then reinvest. They recruit more kids, and earn more profit.

The best response to a system that exploits compassion to do harm is, perhaps, heartlessness.

Libraries
A street kid lurks around my hostel and throws his arms around me, begging for cookies and money.

He’s visible because he makes himself visible, and to give him money means throwing money at the surface of the problem instead of the reality of it: the hundreds of equally, or more desperate, children who do not beg on the streets. The children of families who send their children to school rather than force them into begging, where their lives are more dangerous and short-sighted.

Around the corner from the hugging kid- who shouts “fuck off” when it’s clear I won’t give him my money- are two high school kids raising money for a library. My skepticism is high, but its better, sometimes, to trust, despite your skepticism.

I have no proof, of course, but I have to hope that money goes further than the corner store, or into the hands of child traffickers, further than a huff of paint or shot of whiskey.

This post was written on an iPhone in a hostel in Nepal. Please forgive the autocorrect errors. You can follow This Japanese Life on Facebook. Also, did you know I wrote a book?

This entry was posted in Uncategorized and tagged begging, child exploitation, Nepal. Bookmark the permalink.