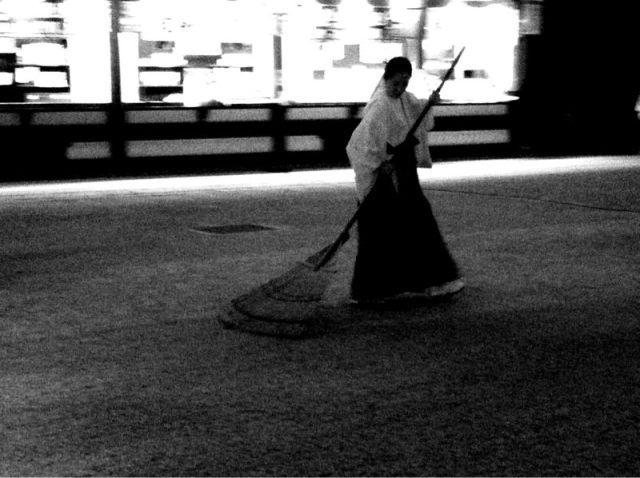 Recorded at the Jinko-Shiki (“God Procession”) Ceremony at Tenmangu Shrine in Daizafu, Japan, part of a Shinto tradition marking the Autumn Equinox. It’s a purification ritual for priests and ends with the lighting of 1000 candles.

The music reminds me a bit of Akron/Family without the noise, but maybe I’m crazy.

The shrine was built in 1591 and is dedicated to education and intelligence. Students from around the area go there before entrance exams to seek good luck – if they can’t make it, their teachers will go and bring back pencils, which have the spirit of the shrine in them.

The rest of the town, which closes in its entirety promptly at 6 p.m., extends from the shrine’s courtyard. For whatever reason, there’s a kid’s amusement park attached to the back of the shrine, which has a ridiculously beautiful walkway behind it if you look for the secret passageway.

The ceremony had about 40 observers and 50 priests/performers. In Japanese fashion, silence was the centerpiece: The shrine is an outdoor space, so the sound of crickets and crackling fire accompanied the simple pieces of music. The whole place smelled like burning cedar.

The song in this recording was performed twice: once at the opening of the ceremony and once for a performance by four women with fans and kimonos.

This entry was posted in Audio, Shrines, Temples and Ruins, Zen. Bookmark the permalink.