On Being Sick in Japan 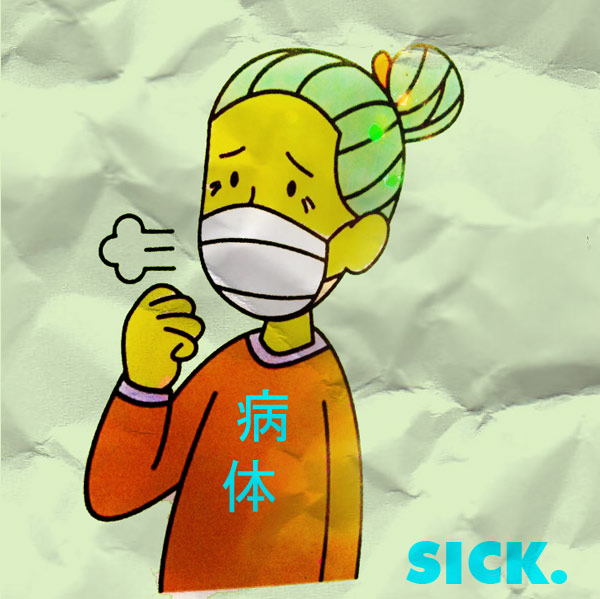 Japan has two kinds of illnesses: colds, and the flu. The flu means you can take a day off of work. If you catch a cold, you are expected to do everything a healthy person does, but you’ll have to wear a ninja mask.

Colds are every disease that isn’t influenza. The Japanese word for influenza is in katakana, because it a disease imported by foreigners and they want everyone to remember that.

Right now I’m writing this post through the haze and headache of a two-week old cold. So, forgive the typos.

Getting a Cold
It’s easy to catch cold in Japan, because everything is a radically different temperature, and the country has a fondness for extreme temperature changes (hot-and-cold onsen baths, for one, air-conditioned subway cars that open into heated subway platforms, for another).

If you catch a cold in America – in my America, anyway, where nobody can afford health insurance or medicine – the first instinct is to call in sick to work or school so you can sleep the entire day. We have sick days for this, and rarely does one need a doctor’s note to actually use sick leave.

In Japan, my process is a bit different: I can take time out of my vacation pay, but I’ll have to go to the doctor, pay a 5,000-yen fee for a doctor’s note, then show the note to my school. This is the process for taking one to three days off, so in less extreme cases, I’d spend my sick day getting up early to catch a train to the city to find a doctor, waiting for the doctor, and then going to work with the doctor’s note so that I can go home and sleep, a process that could take about an entire work day.

The doctor’s note is good for about 3 days. After that I’ll need another one.

So rather than sleeping off a cold, I go to work, then come home and sleep at 6 p.m. until about 7 a.m. the next day, until the weekend, which I spend in bed and hope I heal before Monday.

Getting the Flu
Influenza is the name given to any disease that makes you throw up. This would seem to include actual influenza, poor reactions to antibiotics, and food poisoning. It’s basically “vomiting disease.”

If you get the catch-all influenza, you can be excused from school or work, though again only with a doctor’s note. I know teachers who have come to school, started throwing up and stuck around for an entire workday.

The Mask
The ninja masks are a perpetual source of fascination for westerners and admittedly they still strike me as a little weird even after three years of living with them. It’s especially distracting when someone comes up to me and takes a moment to start speaking; in that surreal moment I’m forced to look at them in a face mask, waiting in silence for something to happen.

Contrary to popular belief, they have nothing to do with air pollution. They’re actually a courtesy: You wear them when you think you’re getting sick to prevent the people around you from getting sick. You can cough into the cotton mask, cover up your runny nose, and prevent other people from catching your germs.

They are also a passive call for handling these people delicately. I once was convinced that a woman who had worn the mask for a month was merely trying to garner sympathy and get less work.

Then I got sick for a month.

Cough Medicine
Western cold and cough medicine is essentially nonexistent in Japan, and aspirin is extravagantly overpriced. You’ll actually get most cough medicines seized at the airport or in shipping, because Japan assumes that the only thing standing between itself and a meth epidemic is a 250ml travel bottle of Robitussin.

Honestly speaking, this is an old joke: Most companies in the US have stopped using pseudoephedrine in their products, and if the concentration is lower than 10% it’s allowed in Japan.

There is almost nothing like cough syrup in Japan, though. There is something called BRON, which has become notorious on Internet forums for destroying lives. In an extreme example of one set of standards for foreign products and one set for domestic, BRON is a nasty concoction of codeine and ephedrine. People in online support groups urge each other to “try to remember the good things in life” after taking this cold-and-fever tablet that is essentially a mix of speed and low-grade oxycodone.

In some countries a similar formulation is apparently used as an alternative to methadone, other countries regulate it to researchers or in a similar way to codeine. Here in Japan, they add caffeine and sell it over the counter without requiring a prescription.

I haven’t done this stuff, but reading about it I wasn’t surprised that a speed-based cold medicine would exist in Japan, where it will pretty much never be abused recreationally and will instead make sure that even the most exhausted workers continue to put in overtime.

I often wonder why Adderall isn’t added to the drinking supply in school cafeterias.

Can I stop writing now? Time to blow my nose. Which, by the way, you can’t do in public in Japan. All day at work I’ve had to excuse myself to the men’s room just to blow my nose.

You can catch This Japanese Life fever by “liking” its disease on Facebook.

33 Responses to On Being Sick in Japan