On School Sports Festivals, or: On Catching Small Boys Falling From The Sky in Japan

My job this week consisted of watching for shirtless boys to fall from the sky.

I had originally been designated as the office watchman, which spawned hazy recollections of my “work” as an “IT consultant” for an empty library in the summer of my college days, checking the printer tray hourly see if any paper had vaporized.

I was doing similar office work when a supervisor came and called me to the sports field. For two weeks, classes were cancelled to practice for the Sports Festival (undōkai), a four-hour extravaganza of dangerous physical activity with few parallels to real sports.

There is tug-of-war and track-and-field, and others that transcend reasonable hyphenation, such as “step-on-each-other’s-heads-to-see-how-high-you-can-climb-on-a-tower-of-boys”  and “lift-one-boy-on-three-boys’-shoulders-and-use-him-as-a-battering-ram” (see below).

On the sports field, I squinted – I was told that “foreign eyes are too weak for the Japanese sun,” – and saw 36 shirtless boys in cotton pants piling on top of each other, nine high, to form two human pyramids to the beat of a taiko drum and the angry demands of a chronically exasperated sumo coach.

This was my life for the next 16 days.

Rain
Most schools have their sports day in the crisp and cool days of Autumn’s wane, just before the early graduation of the third-year students. Our school has sports day at the peak of rainy season.

The decision is a nod to emotional (and not rational) scheduling: This lets the first-year students bond with the third-year students seven months before they leave, rather than one. But it also rains. A lot.

When it rained, we’d cancel any activity which couldn’t be done indoors, including the 9-person-tall walking human pyramid. When asking boys to step on each other’s faces and risk paralysis in blazing heat, Japan draws the line at a muddy field.

Dangerous Children
Americans would not stack schoolchildren into dangerously tall towers where survival depended on the care and maturity of other schoolchildren. Nor would we leave children to wander near mountain cliffs or rivers, or let six-year-olds ride the subway to school.

In the last five years, at least one kid was paralyzed after falling from a human pyramid practice, but no one seems to think that’s a good reason to stop. I’m of a mixed mind on this.

On one hand, we have sheltered children and our country is litigious, so America is raising kids with shitty viral immunity who scream at people out of car windows, while Japanese kids are totally bad ass and never threaten to have their parents sue anybody.

On the other hand, more than one Japanese kid is paralyzed because he was asked to make a human pyramid, or was thrown to the ground during a fake cavalry game – and Japan does not have a lot of children to spare.

The Sun Finally Rises
A four-hour window of sunlight finally opened after 10 days of planned training and six days of unplanned cancellations.

The day begins with pomp: Students stomp along to vaguely Soviet marching music while carrying flags. You have to wonder if Japan is a little sensitive about lacking an offensive military.

I was arbitrarily assigned to the yellow team, which had a lion mascot. Lions are OK, but the rival mascots were a shark that breathed fire and a man transforming into a burning eagle. The lion, lacking magic and flames, could not compete. 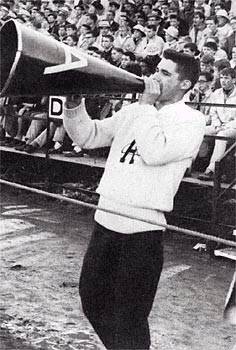 We did, however, win at ouendan, which was translated as “male cheerleading” for 10 days.

I told many teachers that George W. Bush was a male cheerleader at Yale, which they found shocking. When I finally saw ouendan, I could understand why.

Far from men with pom-poms dancing to “Hey Mickey,” ouendan is actually the most bad ass spinning-jump-kick action you could imagine, with screaming, taiko drums and kids looking like fire is about to shoot out of their eyes. Imagine George W. Bush doing this:

(Those kids are rubbish compared to mine, by the way. My kids synchronized spinning jump kicks).

Scaring Away the Sky
I had spent 12 days watching the kids’ faces contorted to resemble plump tomatoes as they resisted giving in to the strain of the human pyramid. Occasionally they would collapse into piles or vomit from the heat.

The tiny, bird-boned boy assigned to climb the pyramid was my priority. If he fell, he’d likely break his neck on the beige beach sand of the sports field.

As he scurried up the wall of squatting or crawling boys, stepping on sunburned shoulders with sand-caked bare feet, my own insane fear of heights kicked in: I get dizzy just looking at the sky.

When the boy’s feet rested on the lower backs of two boys on top of three on top of five, this tiny child stretched his arms wide, swallowed his terror and screamed at the clouds. Beneath him his classmates refused to surrender: A single point of weakness and the thing would collapse. They knew this, because it happened, repeatedly. And when it happened, it hurt.

You Can’t Spell Team Without “M” and “E”
I can’t recall a single event in my high school where we pretended we were all in it together, much less something reinforced with terrifying pain that actually put lives at risk. The metaphor is only too apt for the stereotype of Japan’s “collective” mind against America’s “individuals.”

Ironically, the only injury of the entire event (unless you count the heat-induced vomiting, sun burns and heat stroke) was when a piano fell and broke a drummer’s leg, a random and inexplicable event that could have happened anywhere at any time.

Sometimes the most dangerous sport is standing beside an insecure piano.

7 Responses to On School Sports Festivals, or: On Catching Small Boys Falling From The Sky in Japan