On Christmas in Japan | メリクリスマス！ 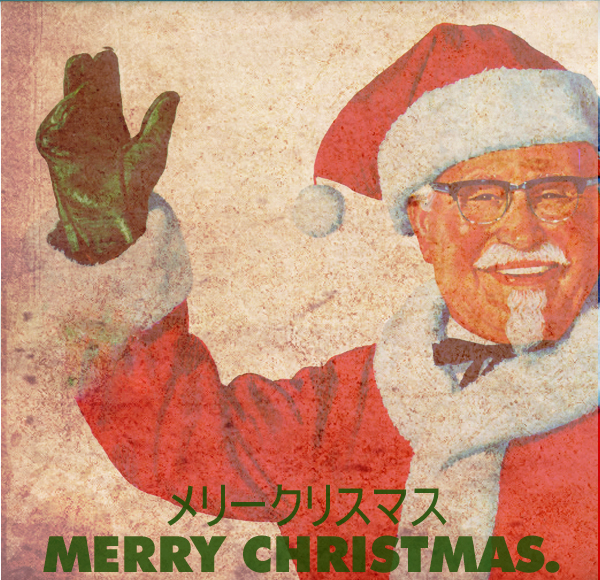 I am not spending Christmas on a date at Kentucky Fried Chicken. But hey, I’m a foreigner.

Christmas in Japan
In the war on Christmas, we know what side Japan is on: The country is not inclined to celebrate the birth of Christ, given that less that 2 percent of the population are Christians. You don’t get the day off, an honor reserved for the Emperor’s Birthday (Dec. 23).

But a Japanese Christmas has traditions: You go shopping for a cake, buy presents, and try to score with your girlfriend: Christmas is a romantic holiday.

Valentine’s Day is traditionally a Sadie-Hawkins kind of affair in Japan, with women giving gifts of chocolate and affection to men who, characteristically, give them nothing in return.

So, as a young Japanese man, where do you take your girlfriend on the most romantic night of the year? If you want to follow the trends, you take her to Kentucky Fried Chicken. But don’t forget to make a reservation. Seriously.

KFChristmas
How did Kentucky Fried Chicken come to dominate Christmas in Japan? It’s not so far-fetched when you consider that the American version of Santa Claus is largely a product of Coca-Cola’s marketing efforts (hence the red and white trim).

Col. Sanders (who never actually served in the military) has a terrifying, life-sized plaster statue in front of every KFC in Japan. In December, his traditional chef’s apron is replaced by a red coat and Christmas hat (Sanders is also sometimes dressed as a samurai).

A Japanese friend told me that growing up, she would see the enormous turkeys and chickens on the table in Tom and Jerry Christmas specials and associated it with America. People in Japan want whole roasted chickens to match that traditional look – but the Japanese oven is usually about the size of a microwave. It won’t fit a whole chicken.

So, since 1974, KFC has offered a package meal (“a set”) with a whole roasted chicken, salads and a Christmas cake (Strawberry and white frosting, a popular Japanese Christmas custom they seem to associate with the UK). You order it in advance, and take the meal home to have a giant, Tom-and-Jerry-sized holiday feast, carcass and all.

Christmas Music
At the underground mall connected to the train station in the city – a sprawling 2-block spread – the faux-French accordion music was replaced on Dec. 1, with four Christmas songs, one of which is the plague that Paul McCartney hath wrought upon the Earth, “Wonderful Christmas Time.”

The song rotation includes some crossover with my students’ lists of “The Top Christmas Songs in Japan,” which he handed to me with no prodding or explanation. Here are the contents of that list:

1. Wham! – Last Christmas
Everyone in Japan loves this song. There is a popular Japanese version, performed by a soul-rap group called EXILE, which has 14 members and its own train. (BONUS: The Sailor Moon cover). WHAM! FUN FACT: In almost every translation of this song into English, it’s happy. George Michael’s heartbreak is ignored, and the song becomes a more appropriate tribute to Christmas romance. The original version has always been misunderstood. Poor, misunderstood George Michael.

2. Mariah Carey － All I Want for Christmas
This song was used repeatedly in a Christmas episode of “In Love With Dinosaur,” aka “Falling in Love in the Eyes of the Unpretty,” a Japanese Ugly-Betty derivative based on an unattractive female comedian who seeks true love from a handsome TV news anchor. The news anchor must decide between Dinosaur and several attractive, educated ladies. The show went off the air and came back for a Christmas special, which used the first 20 seconds of this song on a loop as the background music for Dinosaur’s existential crisis. I have no clue how popular this show was back in 2006, but it’s all I can think about when I hear this song in Japan.

3. Tatsuro Yamashita – Christmas Eve
JR Railways licensed this song back in 1988 and has used it in commercials every Christmas since. The song enjoyed a brief success in America in 1984, when Tatsuro translated it into English, but the JR Railways campaign has kept it alive in Japan. In most of the commercials, a woman is late or waiting for a train. By far, the best one, for pure zeitgeist value, is the one where an 80’s new-wave rocker is worried that her boyfriend has stood her up, only to be surprised by a stranger break dancing in MC Hammer pants. Spoiler Alert! It’s her boyfriend! (It’s the first one in this video).

4. John Lennon/Yoko Ono – So This is Christmas (War is Over)
Since you all know this song, here is what appears to be a 1979 commercial for a local Japanese electronics store, featuring John Lennon and Yoko Ono. I don’t think they had John’s permission.

5. I don’t remember number 5. Either that or it was that awful Paul McCartney song.

Notes:
1. Here is a cooler, more-Japanese-looking KFC commercial for the Colonel’s Birthday.

15 Responses to On Christmas in Japan | メリクリスマス！