On Onsen, or Bathing With Friends and Coworkers

I was naked except for a green smock, flashing some leg and God-knows-what-else to two older women with shovels as I stepped into a small dirt hole in the center of a Japanese bath house. Lying on my back with my head on some bamboo, the women began laying hot dirt over my body in what was already a two-shirt kind of day.

I paid 1000 yen for the privilege.
Thermal Heat
Beppu, in Oita Prefecture in Kyushu, is famous across Japan for its onsen, or hot springs, pools of thermally heated water filtered through various rock sediments to create a connoisseur’s market for bath water. Sodium Chloride baths; Sulfuric Mud baths; Hydrogen Carbonate baths and just plain old hot-water baths are everywhere in the city, each claiming a unique health benefit.

People come from across Japan to strip naked and bathe together, usually segregated by gender, either indoors or out. It’s a common outing for office retreats; “naked communion” in water helps forge a stronger bond. In Shinto, water is sacred, and in a culture that values social cohesion, the sensual experience of “dissolving” into a pool of hot water with a large group carries a lot of meaning.

Anyone who’s taken a hot bath understands that feeling of never knowing where your body ends and the water begins; it’s a central part of what makes a bath so relaxing. When you share a warm bath with others, there’s a sense of connection that is hard to match in any other setting, and one deeply connected to both Buddhist rituals surrounding water and the philosophy of connectedness.

The first public bath house started over a thousand years ago, and natural outdoor onsen came long before that. Tired farmers and hunters would share baths at the end of the day to warm up and relieve muscle tension. It’s said that hunters found onsens by chasing wounded animals, who would run toward the warm water, and that’s why many Japanese associate the pools with healing powers.

To this day, the spa experience is credited with many health benefits, most of which I find pretty dubious. However, the Japanese government regulates nine types of onsen for their health benefits, and Japanese insurance companies will pay for onsen visits (with a prescription), creating a branch of medicine called “balneotherapy.”

That said, it makes for a lot of really weird welcome party stories for expats.

Beppu
Outside Beppu’s train station is a thermal spring to wash your hands. Steam rises from pools on mountainsides and from thick pipes within the city, encrusted with sediment that makes them resemble coral. 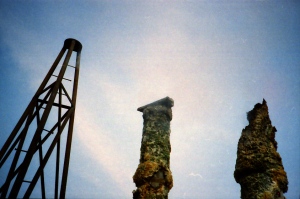 The city itself is, otherwise, unremarkable. It reminded me of small Florida towns where some city council’s idea of fun in the 1990’s was abandoned to rot away.

Beppu has a concrete seaside walkway covered in scurrying sea lice and a shopping arcade scarred by loose tiles, rusty beams and lots of sex-themed services. There’s even an alligator farm to seal the Florida-Japan connection. 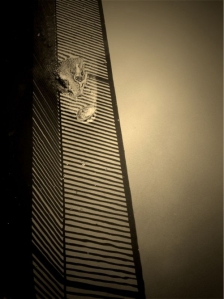 Technically not an onsen, since their temperatures would literally boil your skin, The Hells have thermal pools where the water changes color based on the rocks around them, from burned orange to azure to milky white. You can take foot baths and vendors sell eggs that you can boil in the same water, if eating eggs boiled in a foot bath is your kind of thing. (They’re served with salt and quite tasty, actually).

The alligators and a sex museum are nearby, I’ll let you guess which one will corrupt your memory of Snow White and the Seven Dwarves.

The Sand Baths
The sand cooked on rocks heated by the thermal water running underneath. Two women shoveled it like ashes on my body, burying me up to my neck. It had the gritty texture of coffee grounds and smelled like sulfur, just like everything else in Beppu. I spent 10 minutes looking at the ceiling, unable to wipe the sweat beads from my forehead. My feet started twitching with every heartbeat.

After ten minutes I got up, shook the robe off in the dressing room, showered and sat in a hot bath before emerging with a face so red it looked like I’d just been through the sex museum.

Despite all this, it’s pleasant.

The All-You-Can-Eat Onsen
Closer to home, nowhere near Beppu, I visited an onsen attached to an all-you-can-eat buffet. It’s great because you can eat raw eggs or fish and then boil it in your stomach afterward.

This is an indoor onsen, a kind of bathing theme park with assorted bath types, from water jets to large wading pools, cold and hot, and outdoor baths. I went in the winter, when hot baths cut your core temperature and let you face the chilled air with new resolve. In the summer, it’s pleasant, but you generally just sweat even more and smell worse afterward.

Onsen Etiquette
I learned the fundamentals of onsen etiquette at the all-you-can-eat buffet. You strip in a locker room, then shower with soap, and shampoo if you need it. The idea is that you are completely clean before you even step into the hot baths. The showers might just be little chairs you sit on before dumping a bucket of hot water over yourself to rinse off the soap.

You have a modesty towel if you want it, a small cloth designed to cover up just about exactly the body parts you’d want to cover (women get a full-body towel). But there was simply so much steam that the nudity became a non-issue; no one could see anything anyway and, after all, no one cared to look.

The towel doesn’t go into the water. You fold it and keep it on the outskirts of the bath, though some people keep it on their heads.

Skinny Dipping in Mud
Back in Beppu there’s a number of onsen that allow for “mixed bathing.” This usually means you get to wear a bathing suit. But sometimes it doesn’t. If the water is particularly thick – say, with a dense concentration of sulfuric, gray mud – you may find co-ed outdoor bathing separated by no more than a waist-high wooden fence.

Women are able to get into the mud in a more private area and can then socialise in the pools with mud up to their necks, where men are asked to parade around in the buff or crouch a lot. I crouched. A lot.

None of the other men seemed to care; when my female friend got lost and wandered into the men’s “shower” – basically a pipe 9 feet off the ground with thermal water flowing down into a large pool (great for back aches or shoulder tension) – I was the only one who bothered to reach for a towel. In the mud bath one guy was just sitting on the edge of the pool in full view of anyone who looked his way.

Sex gets pulled out of the nudity pretty quickly in Japan. Families bathe together without batting an eye. Men often parade around in thongs for festivals; and the thongs were just a compromise with Western values to begin with.

For an American, the nudity is initially awkward, but the outdoor onsen is ultimately what the experience is all about. There’s nature, there’s a sunset and the moon creeping over the horizon and yeah, you’re naked, but it’s alright. At least you aren’t cold.

Just make sure not to wash your hair in water that has sulfur in it. I found that out too late, when I went hiking two days later and my sweat smelled like two-day-old eggs.

This entry was posted in Fun, Tradition and tagged baths, beppu, japan, onsen. Bookmark the permalink.

7 Responses to On Onsen, or Bathing With Friends and Coworkers