On Demonic Umbrellas and Japanese Banking 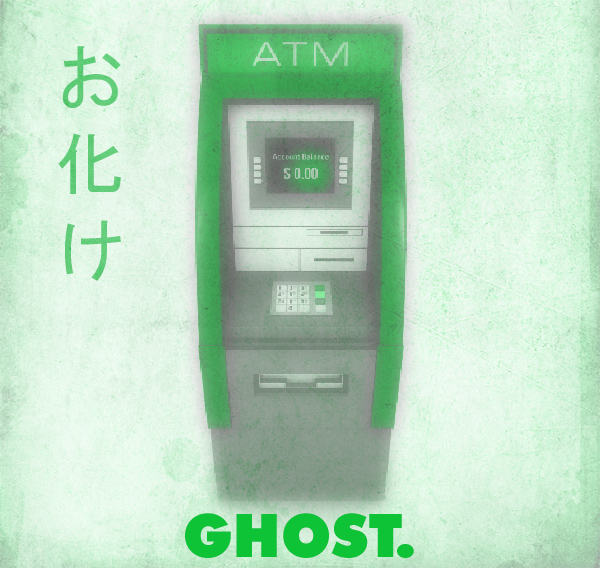 In Japan, many ATMs work from 9 to 5 and get weekends and holidays off. That’s better than most humans get. And the reason, I suspect, has more to do with ghosts than any bank is willing to admit.

True Dreams of ATMs
I’ve stood on the cold side of a locked glass door at 6:30 p.m. and peered through breath-fogged windows to the sleeping ATM that condemns me to a meal of rice and water.

I asked it, silently: “ATM, what do you dream of?”

If we’re going to give them holidays and work shifts, I’ll assume it’s for a reason: When the sun sets and the gates close, anxious cash machines dream in metaphors for miscalculated deposits.

But where do automatic tellers go for Obon? I imagine pilgrimages to grave sites where cast-away cash registers are buried in mounds, with stone markers maintained by their modern descendants praying to the temple of an abacus.

Broken Needle Day
Feb. 8 is Broken Needle Day in Japan. Kimono tailors visit shrines to perform a ceremony for broken sewing needles. They slide them into tofu as thanks for years of hard work; the needles are then officially retired.

In Shinto, every tool is spiritually awakened by its first use. Once, these tools would be given their own names and inscribed with the date they were made: Every rake has a birthday, every needle has a name.

This is the animist aspect of Shinto. Everything is a kind of seed demanding the dignity of a living thing. Out in the inaka, farmers bow to their tractors, children bow to parks when they’re done with monkey bars. Even city slickers say sorry when they bump into the stairs.

The Angriest Centennial
After 100 years of use, objects become self-aware. Elderly items earn a special degree of respect and privilege: They’re thrown into alleys on New Year’s Eve to stop them from coming to life inside the house, where they’d behave with the ferocity of a feral badger and the smarts of a belligerent child.

It isn’t alone. According to the legend, a union of abandoned objects organized to protest shoddy treatment at the hands of the households that tossed them away.

“We have faithfully served the houses as furniture and utensils for a long time. Instead of getting the reward that is our due, we are abandoned in the alleys to be kicked by oxen and horses. Whatever it takes, we should become specters and exact vengeance.”

From this rhetoric the Tsukomogami, or self-aware discarded objects, were born, transforming Japan into a trashcan version of Toy Story. Among the dozens of objects wreaking havoc beside umbrellas: The Zorigami, or self-aware clocks, and Yama-oroshi, the “spirit of the radish grater.”

In the story, a Buddhist prayer rope proposes that the objects should become benevolent, and prove they are still useful, but in an allegory ahead of its time the pacifist bead is beaten by a fascist rake. The spirits come to life, and – holy shit, guys – they build “castles out of flesh” and “bathe in fountains of human blood.”

That’s until a fire happens (?) and only the Buddhist Bead knows how to save them; then they all accept the teaching of the Buddha, except for the ones who come around in ghost stories for kids.

Ghost of the Milli Vanilli T-Shirt
You might not have made this connection, but this is why you get really good deals on second-hand/used items in Japan: No one wants to be transformed into a fountain of blood by a pair of angry pants. So you have incredible prices on thrift store items, many of which are in mint condition thanks to a mixture of Japanese frugality, respect and mortal terror.

There are spirits living inside of objects here. These spirits – kami, sometimes referred to in Shinto as the “8 million gods” (though that number isn’t intended to be specific, it’s just meant to suggest a lot of them) inhabit things all over the landscape, from rocks to trees to tools.

When you go to a Shinto shrine, it’s literally a house for these spirits – the locked up room in the back of the shrine is a resting place for kami. When you ring the bell it’s basically ringing a doorbell and greeting the spirit.

Tool spirits reflect the acts of their owner; as do clothing spirits. Buy that ironic T-shirt from the ‘70s and you’ll be stuck carrying around the aura of the dead guy whose estate sale sold the shirt in the first place.

The Tree is a Priest
It’s explained as a hybrid of Shinto and Buddhist belief.

Buddhists contributed interconnectedness. Fundamentally we’re all made of fish, hair and glue and the fish is made of you. That’s fundamental Zen.

In Japan, Shinto takes it up a notch by granting everything self-awareness. At a Shinto shrine, a tree is a priest. Things feel really alive in these shrines. The plants and the trees seem to move with as much determination as the birds or cicadas; at the very least, you feel like there’s an entire system going on around you.

A system far more intelligent and efficient than Japanese banks.

Which, if you’re looking for practical advice on the matter: most banks now just charge a fee after a certain time, and ATMs in conbinis are open 24/7 pretty much everywhere, eroding the dignity of its mechanical soul with every minute that ticks past 5 p.m.

Will Facebook Self-Actualize in 100 years and haunt your children? Play it safe and subscribe to This Japanese Life. I’ll try to let you know.

8 Responses to On Demonic Umbrellas and Japanese Banking