On Turning on the Japanese Air Conditioner 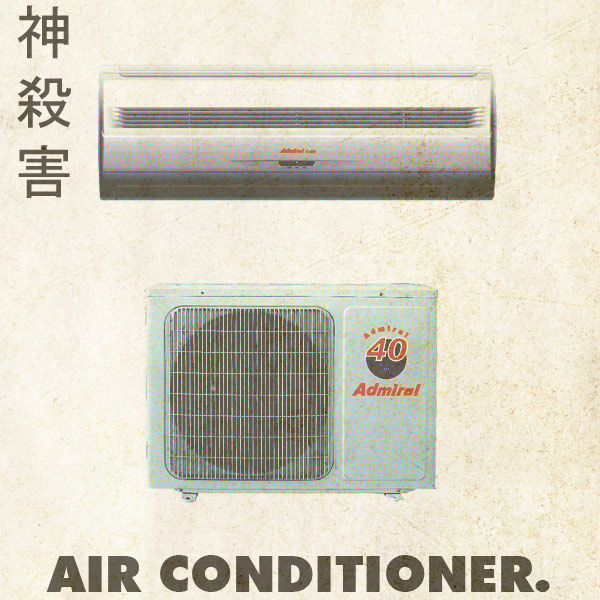 There’s nothing simple about turning on an air conditioner in Japan.

In trains and public offices across the country, the air conditioner is controlled, as are all things, by a faceless bureaucracy. When I worked in an American TV shop, I’d heard that a central office in Georgia regulated our AC, which explained why we had chicken flesh from refrigerator conditions.

It’s one step away from setting the oven temperature by your checking account balance.

After July 1, air conditioners are set strictly at 28C (82F) until September. For that time period, every government office in Japan is 82 degrees.

Cool Biz
The idea is that people should dress to keep cool, and not dress up for an air conditioner. In America, this spawns a temperature arms race, where cold employees freeze in an office, wear a sweater the next day, and then crank the AC to accommodate their decision to wear sweaters to an office in July. By August, the entire office has scarves and wool hats.

So in principle, the Japanese approach makes sense. The office should not be cold in the summer, but merely tolerable. To help workers out, the government announces a date when its employees (such as school teachers) can stop wearing jackets and neckties.

Unfortunately, this date doesn’t necessarily have any relation to the outside temperature or the use of air conditioning. If it is 102 degrees on (say) April 29, men have to wear suit jackets and a necktie. If it is the same temperature the next day, but the rules are now relaxed, you don’t. This plan – called “cool biz” – is an energy-saving measure so that fewer offices increase the thermostat on hot days to accommodate underdressed staff.

Necktie sales have suffered (dropped by a third, according to the necktie industry) but the measure has controlled greenhouse gas emissions as well, stopping about a month’s worth of CO2 from 3.6 million homes from going out and frying the atmosphere over the course of the first two years, which no one can complain about.

However, it is representative of some major quirks that, for better or for worse, Shinto’s naturalism has contributed to Japanese culture:

The Sun Also Rises
The Japanese have also rejected daylight savings time based on these principles. It seems that the sun rises at about 3:45 in the morning on some days. I have to cover my window with a winter blanket to sleep beyond the four-hour mark, but the crows don’t pay any attention as they alert the world to the renewed threat of daylight.

I’ve noticed that expats tend to go a little crazy around the end of May or start of June. I blame the sun and its partner, sleep deprivation.

But even if the entire nation of Japan went crazy for a few weeks, I imagine they’d prefer it to changing the clock face, which would be troublesome and against the natural order.

Say what you want about Japan, but they aren’t kidding around when it comes to the sun. It’s the kami, (roughly, “Goddess,”) Amaterasu, who gave birth to the Emperor. She’s on the flag. She’s why it’s the land of the rising sun.

In the myths, Amaterasu vanquishes famines and battles the storm kami, her brother, a rather unstable being who shifts in stories from evil to good, but always ends up fighting with Amaterasu eventually.

We’ve had rainy season here, including large landslides and evacuations from nearby Oita prefecture, and when the sun comes out from the soaking onslaught of dark clouds, it feels absolutely victorious.

The Aircon As Heresy
As heat and sunlight are the gifts of the most benevolent Goddess of the Shinto faith, you might see why the Japanese turn on the air conditioning with some degree of subconscious dissonance.

Gods and Goddesses is a very Western translation of kami, though, and a bit of overkill. Shinto doesn’t root itself in Gods or even spirits, as we tend to relate to them. Rather, a kami is an element of the world that inspires awe. When we say the sun goddess, the Japanese are thinking more along the lines of “the sun that inspires awe,” such as warm days, or after eradicating a rain storm (and the awe the rainstorm inspires is a kami of its own).

You know that scene in American Beauty where Ricky Fitts goes bonkers over that plastic bag? In Japan, they’d say that Ricky is recognizing the kami of wind.

It was one of those days when it’s a minute away from snowing and there’s this electricity in the air, you can almost hear it. Right? And this bag was just dancing with me. Like a little kid begging me to play with it. For fifteen minutes. That’s the day I realized that there was this entire life behind things, and this incredibly benevolent force that wanted me to know there was no reason to be afraid, ever.

Ricky, we’ve found you a religion.

Shinto places tremendous importance in being open to this kind of awe, and to the full experience of kami. While people in Japan can (and seemingly always will) be distracted by daily life, reminders of natural beauty – the Gods behind all things – are the sustaining tenet of modern Shinto.

Close the windows on a hot or cold day to block out the weather, and you are distancing yourself from awe and wonder at the power of nature, and the sun, and the rain, and the wind.

Comfort – here, living life within a certain range of temperatures – is actually a way of staying rooted in your own troubles and anxieties, because you are (literally) closing the window on awe. The air conditioner might inspire awe, too – and artificial objects have kami, too (see ATM machines). But the air conditioner doesn’t usually make us appreciate anything, it just isolates us from extremes.

You can imagine your air conditioner sucking in the awe-and-wonder gods and filtering them into a fluorocarbon mixture, which it spits out in the form of cold, joyless air.

So we don’t bow to the kami of the aircon. In Japan, if the sun wants you to sweat, you sweat. If you sweat enough, you think about the power of the sun, and your connection to (and dependence on) the natural world, and maybe you won’t care so much that you’re sweaty and tired, because maybe you’re supposed to be sweaty and tired.

11 Responses to On Turning on the Japanese Air Conditioner