On Making Ice Cream Out of Plastic in Japan

Somewhere near the divine Buddhist wholesale district of Tokyo is Kappabashi-dori, the street with the highest concentration of plastic food manufacturers in Japan.

If you visit any restaurant in Japan, you’ll see plates of plastic ramen, tempura or sushi on display. Aside from the occasionally levitating spoon or beer tap suspended in air, the food is remarkably lifelike, albeit somewhat drained of its foodness.

In robotics, researchers struggle with the “uncanny valley” – the idea that something that looks really close to human, but not quite, is more terrifying than something that doesn’t look human at all.

There’s something similar at work with plastic foods. Browsing through a cheap neighborhood with generic plastic displays – seams of bound plastic on the side of the chicken, or chipping tempura flakes revealing slabs of pink paint and not a plump shrimp-like substance – you instinctively feel as if the food will be cheap and nasty, too.

And so the makers of plastic food – or sampuru, derived from the English “sample” – craft slabs of meat with the same ridiculous eye for detail as most artists. While factories stamping out food replicas from plastic molds exist, it’s not the norm.

Instead, restaurants can send pictures of food – or invite a plastic food craftsman out to the restaurant – and the samparu artist will labor over an exact replica of the dish, down to the number of shrimp you can expect in a bowl of soup.

Waxy Ramen
Back in the 1920s, Japan was headed towards the nationalistic bent that would partly define the 20th century. But it wasn’t there quite yet. In fact, it was heavily invested overseas, and culture from the west was seeping in through literature, painting, and, for our purposes today, food.

Having foreign food on your menu was a novelty, but practical people still wanted to eat. So craftsmen started making mock-ups of foreign foods from wax to make it easier for the simple folk to choose an exotic meal.

In the 1980s, there were 2,000 plastic food artisans in Japan, some clustered together under the guidance of a single sampuru sempai. And like any other art in Japan – take sushi, for example – sampuru started to coalesce around a certain technique, gradually mastered.

Birth of a Steak
Consider the birth of a plastic steak. Samparu artists (artists is apt, as a New York Gallery presented an exhibition of these pieces back in the 1980s) start by using rubber molds, which are filled with gooey silicone and then heated until it dries. The result is a thick and slightly flexible hunk of gray beef, which is colored by hand.

Some craftsmen insist on creating replicas practically identical, inside and out, to the original food. This lets them save samples and treat them as actual foods – cutting lettuce in half, for example, and having it look like cut lettuce. So craftsmen start with the building blocks first, then move on to prepare replicas of actual dishes.

The process was simple – we put some hot colored wax at the bottom of a sundae glass, then used a giant caulk gun to splash in some vanilla plastic. The red wax – strawberry sauce – reacted just as it would with actual ice cream. Sprinkle in some corn flakes – crispy enough to crunch up, if I’d wanted to – and then bring back the caulk, followed by a spoon.

A variety of additional food replicas were around for use as toppings – cookies, chocolates, even rubbery Kit Kats. Then the sundae cooled for an hour.

Lick the Screen
Japan as a whole seems unnaturally preoccupied with looking at food. That there is an entire industry dedicated to making replicas of food isn’t too surprising if you’ve ever channel surfed on a Japanese television set. Try to count five channels without watching someone cooking or eating. 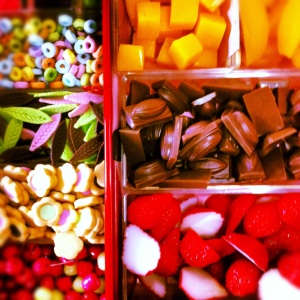 As an American, it never made much sense to me until I started reconsidering my own approach to food. There’s a bit of a “mindful eating” craze going on in America – at least according to the cooking section of the New York Times – which has been full swing in Japan since the Emperor descended from the heavens and founded good old Nippon.

The Japanese diet is as visual as it is sensual. If it doesn’t make sense as an American to watch people eat on television for four hours of prime time, that’s because we have a different relationship to food: We don’t care about the presentation.

In Japan, the presentation of food – and everything else – is oftentimes more important than the actual experience of eating it. So watching food on TV is still kind of satisfying. It actually can curb an appetite – and if you think that’s impossible, go look at the sales figures for pornography.

If you love to look at things you can’t eat, try looking at, but not eating, This Japanese Life on Facebook.

This entry was posted in Food, Weird and tagged japan, plastic food. Bookmark the permalink.