I spent Halloween on top of a mountain in Oita Prefecture at a 3-star resort hotel in an otherwise abandoned resort complex surrounded by rice paddies, a ski slope overrun by weeds, two empty minimalls, a locked-up bowling alley and a stripped-down pachinko parlor. A hypermodern Japanese ghost town.

It’s history reads like a ghost story: The resort was built by a “completely mental” rich guy who went crazy in the late 90’s and spent his fortune developing a sprawling tourist village in the middle of a farming village. This legend is tempting. The hotel holds more people than could live in the surrounding 4 towns combined. The route to get here is a bewilderingly dangerous narrow road winding up the mountainside, spitting you out into a gravel-paved, unfinished parking lot and then, miraculously, to a fully staffed valet.

The hotel interior is gorgeous. There’s a breakfast buffet (or “Viking-Style Breakfast,” as it’s called in Japan) and a public bath that looks out at the miles of mountains and rice fields. The staff is polite and the gift shop sells cheesecake-and-marshmallow mochi, one of the best snacks I’ve had in Japan.

Japan’s Bubble
During the American banking crisis, Japan had the dubious distinction of being a “worst case scenario” reference point in the media. Despite maintaining 5 percent unemployment (compared to America’s 10 percent) in a nation with universal health care and one of the lowest crime rates in the world, Japan is viewed as a colossal failure of capitalism. Around 1990-1993, Japan endured a similar economic crisis to what hit the United States in 2008. Japan has failed to grow its economy substantially since, resulting in a “lost decade” that has extended beyond 20 years, and this year China finally pushed Japan aside as the world’s second-largest economy.

The Hotel Sekia seems to have been constructed at exactly the wrong time. From the decor and the video games locked up in the bowling alley (including one pizza delivery game with the slogan, “Nobody orders a COLD PIZZA!”) the hotel smacks of Clinton-era aesthetics. Rainbows meet sharp angles inside, while the exterior fuses Spanish architecture and the opening credits of “Saved by the Bell.”

Knowing all this, you could imagine the Hotel Sekia being a reasonable business venture caught up in a sea of popping economic bubbles, scheduled to launch just as a stock market crash and real estate loan crisis (and declining property values) drown everyone out in a sea of rising debt.

This could be a rational explanation, if the core business strategy was sound. Which it wasn’t. 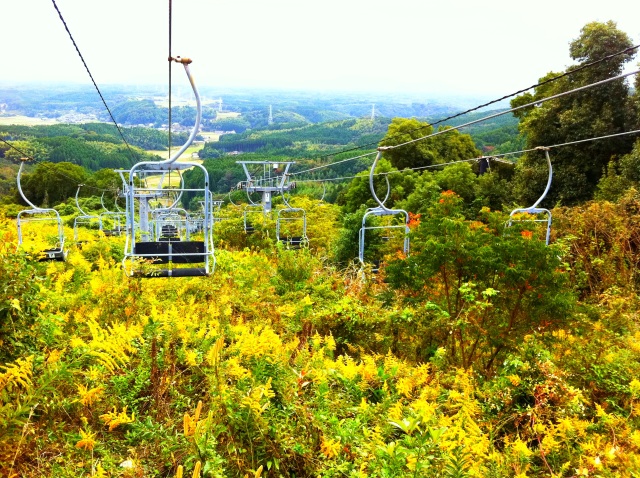 The Ski Resort
Hotel Sekia was designed as a ski resort. The problem is, Kyushu has a climate comparable to South Carolina. It doesn’t snow here – it frosts.

Japan is known for its overreach when it comes to entertainment: Indoor golf courses, indoor tidal pools, onsens made of ice. But those were all the products of a rising bubble, when the novelty of defying nature was affordable to build and worth the price to tourists. Hotel Sekia seems to have been built just as defying nature lost its charm.

Now, what would have been a ski slope, fueled by a constant stream of artificial snow on artificial soil, is a field of rusty ski lifts. The mountainside is coated in long patches of fake grass being torn up by real weeds.

The Minimall
The two minimalls at Sekia Hills are sorted into shop fronts and an entertainment complex. The entertainment complex hosts a bowling alley and children’s play area left to birds and a rainbow-striped, warehouse-sized room that smacks of pachinko. The other side of the mall is abandoned store fronts: An outlet mall, a deli shop filled with ancient computers.

There are probably about 14 store fronts in the hotel parking lot, and 17-21 in the neighboring complex. Both malls are separated by fields of parking lots and foundations laid for some crazed Japanese tycoon’s now-abandoned dreams.

The Chapel
Somehow, the Hotel Sekia has survived, possibly as one of many Japanese “Zombie Corporations” propped up exclusively by subsidies from struggling economic regions. There is another survivor of the resort’s long-ago apocalypse in the hotel parking lot: A wedding chapel.

The Hotel Sekia is selling itself, these days, as a place for weddings. Its literature obviously stresses the beauty of its countryside surroundings over any pitch to the abandoned-minimall-wedding fantasies of young Japanese brides. You can go there and find a dress for yourself and clothes for the entire wedding party. Two families were at the hotel when I stayed there, clearly out for matrimony.

But there’s a certain kind of irony in a struggling hotel – and ski resort without snow – changing its strategy to weddings in a country with one of the most rapidly declining birthrates in the world.

Also read: “On Ruins,” for more about the abandoned and neglected buildings of Japan.

This entry was posted in Fun, Photography, Travel, Uncategorized, Weird. Bookmark the permalink.

10 Responses to On Abandoned Ski Resorts in Japan | 逃散