Kyoto is for lovers!

Shijo Dori
Some might say that Kyoto is not about romance. There are temples and shrines everywhere, some of the oldest in the country, and so Kyoto could be considered the spiritual heart of Japan.

But as the sun sets on the Kamo river, its beds are flanked with a thin black line of hand-holding couples. At dusk you can step into any alley and find a narrow maze of lanterns and stone paths leading to restaurants that bleed red wine through sliding paper doorways.

As a solo traveler it’s hard not to cringe as I sit alone at a shop with dim lighting, staring out the window at a canal, expensive pizza en route and a glass of wine to get me started. Out comes the iPod and the prompt download of the OK Cupid application.

My time spent traveling alone in Thailand taught me the lesson of gratitude at the expense of an anxious longing for what I’d imagined I “ought to have.” Kyoto is a direct challenger to that progress. After one night in the black and red dimly lit neighborhoods of Gion, and I understood why men pay women in white makeup to pour drinks and laugh at their jokes.

“Love in action is a harsh and dreadful thing compared with love in dreams. Love in dreams is greedy for immediate action, rapidly performed and in the sight of all. Men will even give their lives if only the ordeal does not last long but is soon over, with all looking on and applauding as though on the stage. But active love is labour and fortitude, and for some people too, perhaps, a complete science.”
– The Brothers Karamazov

If Dostoevsky were an urban planning expert, he might have described my Kyoto as the city of love-in-dreams. Everywhere there’s some temptation to do something bold in the name of love. The air is crisp and small canals reflect paper lanterns along the streets. If Kyoto were swapped with Paris most poets wouldn’t notice.

But Kyoto is love in dreams, a city of projections. With imagination, the city could be anything. You don’t even know this city, man. How can you say you love it?

Gion
There’s an apparition moving at me. There’s something ethereal about her shoulders. They don’t shift when she walks. Somewhere below her kimono there might be a skateboard, but I know it’s wooden sandals, geta, and she’s moving through the crowd with poise and carefully maintained speed. I lift my camera to get a photo but the damn lens can’t focus, and suddenly she’s floating left instead of right; zigging where she should have zagged.

Which seems to be the entire allure of geisha. If you have indulged in that capacity for love-in-dreams, maybe you understand the allure of paying a woman to laugh at your jokes and play the harp. Some men can understand prostitution – you pay for a service in which the rumpled bed sheets prove that something physically has transpired.

But paying for the illusion of love? Intangible, ethereal, wispy love? No wonder my lens can’t find her, she’s cultivated to be a walking gaussian blur. For the romantics, paying for sex doesn’t make any sense. Paying for a human screen to project a dream on for a lifetime, though? Paying someone for the thrill of impossibly longing for them? To maintain a love in dreams that will never become that dreaded love in action?

That’s worth some money.

“It is much, and well that your mind is full of such dreams and not others. Some time, unawares, you may do a good deed in reality.” – The Brothers Karamazov

In the southeastern bit of Kyoto, near Kiyomizudera, there’s a long wooden hallway with 1001 life-sized Buddhas painted gold. They line the back walls in rows, five high, standing on rafters like basketball parents watching a high school tourney.

Along this hallway are five statues of various Buddhist icons, famous monks or spirits, slightly larger than life-size in the case of the men, but 100 percent accurate sizes for the supernatural beings. 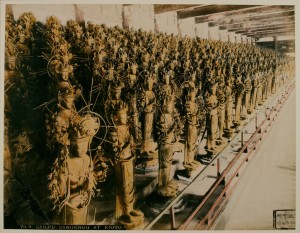 It was 10 a.m. on an arbitrary week in autumn and no one was in the temple. The warrior spirit, Fyudo Myu, was alive and well in darkened bronze. We’ve been old friends since I met him in the Buddhist temple at the Museum of Fine Arts in Boston. He’s that badass friend of yours who learned early on that he’d have to be responsible with his strength. In real life he’d be a noble bouncer or an honest cop. A total dick on the side of good.

Fyudo Myu has a noose to drag you through your delusions. It’s ironic, then, that I swore I saw him breathing.

The statues’ eyes are crystals, and it’s like staring into human eyes. They seem to move. I have to imagine that it’s this human habit of finding human faces – the man in the moon, Jesus in the pita bread – that tricked me into seeing that slight heaving of his chest. In Kyoto, the Geisha don’t breathe, but the statues do.

I don’t know if you’ve ever been recruited into an organization that plans vaguely cult-like weekend seminars for self-actualization, but if you have, you might be familiar with the experience of staring into the eyes of 20 complete strangers for ten minutes each. It is the purest form I’ve experienced for catching on to the heaps of bullshit that I project on people: “Are they angry? Are they sad? Is this woman in love with me? I feel like she’s in love with me. Oh shit, who’s this guy?”

The same thing happened when I stared at the supernatural beings.
“He looks sympathetic.”
“He looks scary.”
“He has nine eyes and it’s freaking me out.”

The centerpiece of the temple is a single sitting Buddha as tall and wide as ten of the soccer-mom Buddhas standing on the rafters. While this is a temple in Kyoto, and a historical tourist attraction, it is still a temple and so it is still a place where you can light incense and meditate. A sign suggests, “Let’s pray for our loved ones.”

Which I am always skeptical of doing, despite my Buddhist leanings, but thanks to reading Eat Pray Love I figured I could indulge in meditating at a tourist attraction temple and then writing about it.

The challenge of my anxiety – my frayed social connections, the isolation and loneliness of life as an expat in Japan – has been to find its root and weed it out. By withdrawing from the somewhat insular world of the English-speaking expat community where I live, even for a handful of days in Thailand, I’d learned a thing or two about being alone, namely, that it is not, in fact, the terrifying simulation of death I’d assumed it to be. Or, more accurately, it is precisely a simulation of death, but death is a lot more fun if you do it right.

I am floating adrift with loose ties, trying to look outside for a rock to be tethered to. And finding none, I panic. I have lacked a grounding sense of grace. When I have needed grace, I’ve demanded it from other people, and then drifted. Of course I’d be anxious.

So I kept eye contact with the Buddha and imagined the face of everyone I knew, for a cycle of two breaths, and allowed myself to feel grateful for their presence in my lives. Even the douchebags and the shits.

I stared into the crystal eyes of a towering Buddha, watched it breathe, breathed with him, cultivated love and serenity, broadcast my goodwill outward, and my entire world transformed into the album art for a 60’s psychedelic rock compilation.

8 Responses to A Neurotic’s Travel Guide to Kyoto, Part 1