On the Ephemeral Nature of the Starbucks Sakura Latte 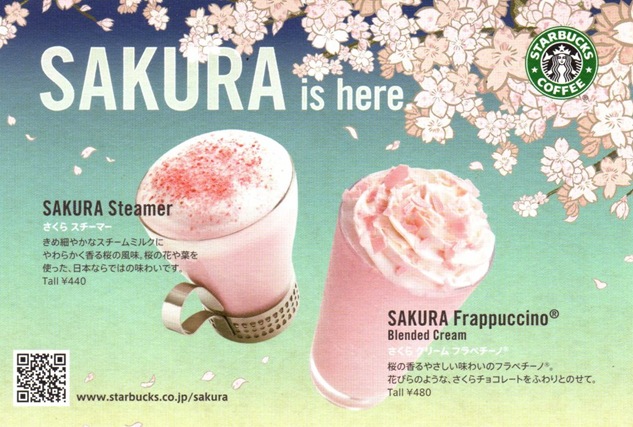 Maybe a Sakura Latte is not weird.

It’s getting hard to tell. After months of figuring out Japanese culture, my go-to instinct is still bewilderment. Starbucks had primed me for the Sakura Latte since Feb. 10 with a small sign that said: “Coming Soon. SAKURA!” When the cherry-flavored latte finally arrived, it was delicious. Case closed: Japan is not that weird.

Come March, we’ll be in Cherry Blossom (Sakura) season. It will sweep the nation into a picnicking frenzy laced with Japan’s twist on existential ennui: Mono No Aware, recognizing the passing of the ephemeral.

Wikipedia says, “[Mono No Aware] describes beauty as an awareness of the transience of all things, and a gentle sadness at their passing.”

It is, simply put, acknowledging the passing of time. Western cultures need to use bigger words – transience, awareness, the ephemeral – because we’ve been mislead into thinking that the passage of time is no big deal. Americans move through time. In Japan, time leaves you behind.

This is everywhere in Japanese culture. Mono No Aware is the driving force behind everything distinctly “Japanese,” from Haiku to Cherry Blossom viewing to baths to the nation’s photography obsession. All of it captures the fleeting and reminds us of what has left us. We’re left documenting what will soon be nostalgia.

In Japan, photographs and haiku poetry both strive toward understatement and an absent observer. Haiku should be egoless; photography should be instant. The famous Japanese photographer Daido Moriyama is known for rarely looking through his viewfinder. The Japanese new-wave film director Ozu Yosijiro placed a camera on the floor for many of his movies, regardless of how far away the actors had to be.

The presence of an “artist” corrupts what Japanese art often strives to capture: The world that has gone by.

Comparing Apples and Cherry Blossoms
“The blossoms of the Japanese cherry trees are intrinsically no more beautiful than those of, say, the pear or the apple tree: they are more highly valued because of their transience, since they usually begin to fall within a week of their first appearing. It is precisely the evanescence of their beauty that evokes the wistful feeling of mono no aware in the viewer.” – Stanford

And so it is with the Sakura Latte, its evanescent beauty evoking wistful feelings. The Sakura Latte is more Japanese than its flavor, even if the American Starbucks offers limited-edition seasonal blends or drinks.

Consider the Kit-Kat. Since Christmas, we’ve had strawberry shortcake (the flavor of Japan’s traditional Christmas cake). It just changed to a boring (though delicious) white chocolate bar. Soda changes, too – a Green Cola I found in Nagasaki last week is already impossible to track down; Hazelnut Pepsi is getting obscure.

I’m often asked about scoring Green Tea Pepsi or Melon Kit-Kats, things that snack-food fetishists the world over have come to associate with Japan. But these products are usually available for about six weeks, if they’re successful, and two-to-three weeks if they aren’t.

It’s no surprise that no one walks and drinks vending machine beverages at the same time. It’s like the commercial residue of a deep spiritual tradition of observing the passing of time, sponsored by Suntory.

If you ignore the western irony about corporate coffee and focus on Japan’s deep respect for food, it’s not too far a stretch to claim there is something almost transcendental about the limited availability of the Starbucks Sakura latte.

I’m drinking it on a rainy day at the cafe’s window beneath a six-story bookstore, watching people pass in umbrellas. The rain stops. The passersby move on, the rain stops and I finish my latte. I rise to leave and this scene is over, present only in the coffee cup I’m about to toss away.

For a nation with such a passive but deep-rooted spiritual tradition, it’s almost impossible to imagine marketers ignoring it.

Hanami Parties
Hanami is the springtime tradition of barbecue picnics out in the cherry blossoms. They involve wholesome grilling and picnics and copious amounts of sake. They can get pretty raucous and older people have taken to plum-growth watching to get away from rowdy kids and their booze.

But the underlying principle of the cherry blossom is that it is a temporary kind of beauty; it’s here and it passes. I’ve documented Japan’s relationship with ruins here before, but cherry blossom viewing touches that same spot in the Japanese heart: Watching beauty, aware that it will decline, and letting it be.

Issa, a famous Japanese Haiku writer:
A world of grief and pain,
but the flowers bloom
even then…

To which modern Japan might answer:
A world of grief and pain,
but the flowers bloom,
let’s have a Coke.