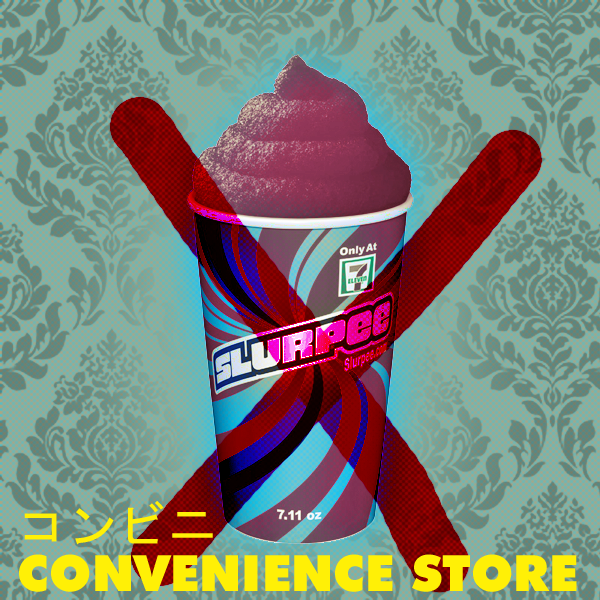 There’s some irony that the English “convenience store” is such a misnomer. There aren’t real conveniences, just bathrooms and cigarettes, packaged food and buckets of shaved ice smothered in anti-freeze colored syrup.

Japan has adopted the concept – and word – for convenience stores into konbini, but konbini are a whole other creature. They actually make life easier for you.

1. Pay Bills
Every Japanese bill has a bar code. Take it to the konbini when you’re buying canned coffee and you can pay your car, Internet, heat and/or gas bills. They stamp it and you keep the peel-off section as a receipt.

This is great because Japanese banks hate every business transaction. To cut their workload, they close their ATMs at 5 p.m., bank branches at 3 p.m. daily and have an habitual need for more forms, IDs and stamps than you will ever remember to bring.

The only things banks like less than customers are their own employees, who spend 3 p.m. to midnight manually counting all the money in the vault. This is exceptionally cruel given how little money goes in and out of a bank.

Aside from the Post Office, the konbini is the only place you will be able to use an international ATM. The machines are open, often 24 hours, with a small fee (typical to American ATMs) for use during non-standard hours (roughly 5 p.m. to 5 a.m.).

2. Buy Baseball Tickets
You can buy baseball tickets – and airline tickets, and anything else with tickets – at a konbini kiosk with a touch-screen, provided you can navigate the dense maze of kanji, hiragana and useless icons. These machines save you and the konbini clerks time until some idiot like me comes in and can’t figure out what to do.

Ordering baseball tickets took three people, though admittedly one of them was the patient konbini clerk who did everything. We chose our seats and then wrote our names – once in Hiragana and once in Katakana (imagine being asked to write your name in Helvetica and then, for no reason, in Zapf Dingbats). You take a receipt to the clerk and pay.

If you are competent at living in Japanese society, this thing would be awesome.

It’s the only place you can buy tickets to Studio Ghibli, the Miyazaki-based anime museum (“My Neighbor Totoro,” “Howl’s Moving Castle,” “Ponyo,” etc.) and Tokyo Disney.

3. Read Manga
I go to the konbini every day. There is always a line of men in suits flipping through comic books. There’s pornography, too. No one shoos them away and they never seem to buy anything. So, enjoy the manga library.

4. Get edible food
The konbini has a range of American-style junk food: Hot dogs, chicken nuggets, french fries and deep-fried octopus balls. The aisles are lined with potato chips, candy and squid jerky. The fried stuff is served hot and somehow the clerks make it go away if it starts to look disgusting. If you like dried-up, shriveled fries or chicken coated in coagulated grease, stick to America.

But what’s shocking is the array of fresh salads, sushi and sandwiches lining the outside walls. I’ve written about it before. I get onigiri, a salad and a sandwich, sushi or noodles every weekday and always feel pretty good about what I’m eating. They rotate the choices out by season and a couple of things change every week.

It’s almost as if the store wants you to be healthy and enjoy your food. It’s sad that something so basic inspires culture shock.

5. Get ridiculous food
Someday I will dedicate an entire post to snack food in Japan, but let’s just say I drank something called “Sparkling Soy Water” yesterday and it was delicious.

6. Pick up your mail
A lot of shopping in Japan is through sites such as amazon.co.jp or rakuten.co.jp. These sites sell stuff from Harry Potter novels to cars. But since the post office only delivers three or four times a day, maybe you need more options.

The konbini will serve as a temporary address for your packages so you can get your stuff while paying your bills, reading manga and buying tickets to Disney Land.

7. Get Choudo’d
This is a game invented by a friend of mine. It involves handing exact change to the convenience store clerk. Your goal is to get the clerk to acknowledge that you have exact change – “choudo.”

It’s not hard. When you pay in exact change, anywhere, the clerks get really excited about it. “Choudo, desu ne?” (“It’s just right, isn’t it!”). Every so often we decide to strive for the rank of Choudo King, paying in exact change whenever possible.

What you can’t do
A kind of absurd list via Wikipedia:

Why are konbinis so awesome?
I’ve already mentioned one of the amazing things about Japan: The post office delivers three to four times a day. This is the Japanese principle of “maximum participation” at work.

Maximum participation means full employment. If it takes two-to-three shifts for truck drivers to deliver food from distribution centers to the stores then that’s great for everyone. (Many konbinis even have a dedicated shift in which the person, when not stocking/cleaning, simply stands behind the cashier to heat meals in the microwave, or fetch cigarettes).

This explains why you’ll often see one brand of store clustered together in a small area. One truck can drive to all those stores and restock the shelves with fresh food throughout the day at a reduced cost, taking notes on what’s selling so they can expect sales for the next day. They make exactly as many salads as necessary.

This is weird because I’ve noticed, in a bout of consumer paranoia, that my purchases have a direct impact on what’s stocked. In my first few days in Japan I’d buy an egg salad sandwich when I saw one, but it was usually sold out. Within a week, there were two on the shelves every day.

With all due respect to my beloved homeland, I wonder why so many Americans tolerate, and pay for, lousy salads, service and systems.

This entry was posted in Culture Shock, Food. Bookmark the permalink.