On Being Vegetarian in Japan 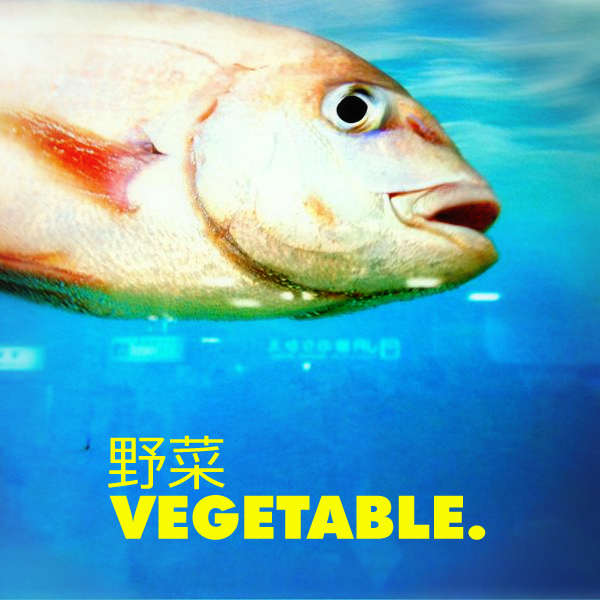 Most Japanese people don’t think twice about eating living animals. Or more accurately, they think, think again, then go ahead and eat them anyway.

The savagery of dining starts small, with bars where you catch eels from a pool to be filleted on the spot. You can swallow live minnows out of wine glasses, or you can go for maximum sadism by ordering a squid that will watch with big, sad eyes as you slice its still-breathing body up and devour it.

Despite Buddhist influence on Japan, the culture has always been vague on what separates animals from vegetables.
I’ve stumbled through vegetarianism in practice and came here eating only fish, but in Japan’s onslaught one quickly abandons any food-related ideological stance.

I would discover just how difficult vegetarianism is when my friend visited, allowing eggs and dairy as her only dietary loophole.

How Do You Say “Vegetarian” in Japanese?
The word for Western-styled vegetarians is “bejitarian,” which is a borrowed loan word from English. There is a native concept, too: saishokushugisha, but this doesn’t really cover everything: saishokushugisha and “bejitariansu” can still eat fish in Japan.

The closest thing to strict vegetarianism is shōjin ryōri, literally “devotional cuisine,” which comes from the practice of monks adhering to Buddhist principles of non-violence. It’s not a dietary choice, it’s spiritual asceticism. Most monks don’t eat meat because they want to eat meat, not because they don’t.

Telling a mom-and-pop udon shop that you need shōjin ryōri cuisine is sort of like going into a conbini for iced oolong and expecting a tea ceremony. It makes for a great koan and an awkward social situation. 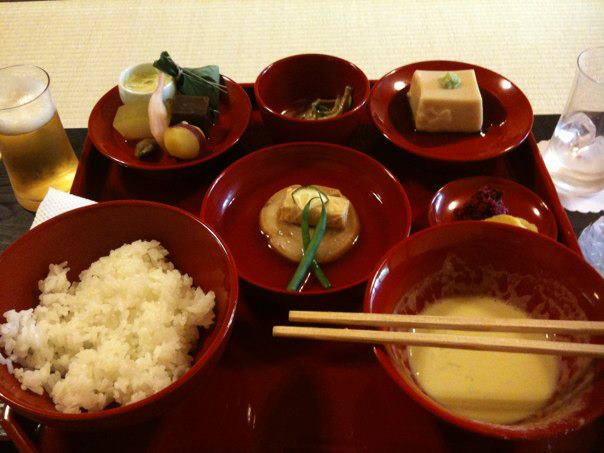 We found a shrine, Tenryuji Shigetsu in Arashiyama [map], that served shōjin ryōri meals prepared by monks in a temple garden. It was primarily tofu, peanuts, leaves and soy-based gelatin, but included lotus roots and eggplant. It was certainly filling and delicious, though I had a beer with my 11 a.m. lunch in a Buddhist temple, violating the shōjin ryōri precept. It was also 3,000 yen ($32.00 US) for a basic course (not including the beer).

This isn’t a get-out-of-meat-free card, though. Trace amounts of meat are negligible to kitchen staff. That’s also true of any flesh blended with anything else. Mix pork into a potato and it’s no longer meat – it’s a croquette.

After going through the full restricted-food list, my friend got a delightful assortment of vegetable tempura minus the standard eel and shrimp, served with fish sauce.

Put A Steak On It
Japanese restaurants will add meat to anything.

Tomato sauce has fish oil. Salads have bonito (fish flakes) or sliced up crab. Indian restaurants have beef stock or steak options; you’ll rarely see an Indian place advertising itself with vegetable motifs as you might in America.

Even canned coffee isn’t safe. Coffees with jelly (yes) tend to be popular in the summer, ensuring that any foreigner pushing random buttons on vending machines will end up with animal-based gelatin in their morning “brew,” which really ought to scare anyone.

Anti-Vegetarianism
At one point we spent about 2 hours looking for vegetarian options that were still “Japanese.” I asked a waiter about the models in the window, where there was a plastic donburi – eggs and chicken served over rice.

“My friend’s a vegetarian,” I said in Japanese. “Can you make this without chicken?”
The waiter looked at it and pointed to the chicken. “Ah, but there’s chicken.”
“Yes, but she can’t eat chicken,” I said. “But, she can eat eggs and rice.”
“Ah,” he said again. “But this has chicken.”
No dice on getting a chicken-free donburi. An hour later we settled, as usual, for pizza.

A Conspiracy of Meat
Call me crazy, but I think some places remove items from the menu when they find out vegetarians can eat them. One vegetarian friend used to order a special Bi Bim Bap, sans steak, and the chef obliged. Kimchi and rice in a bowl? Delicious. After about three weeks, it was taken off the menu, with or without meat.

This isn’t totally inexplicable. After the war, meat was expensive and vegetarian foods – rice and crops – were the only option. This was a time of black-market goods and small-scale famines. Food had paltry nutritional value.

But it was “vegetable based,” and so vegetarian meals may have become associated with poverty and starvation, whereas meat eaten by American soldiers made Americans (and America) healthy and strong.

That generation raised kids to believe that meat was essential to their health, and those two generations are now the majority of Japan’s population. One survey indicates that only .08 percent of Japanese natives are ideological vegetarians.

Another theory: Chefs, realizing they have a vegetarian option on the menu, decide it would probably taste better if they added meat to it.

Japan’s Vegetarian Myth
With all this, I have to wonder why so many vegetarians, particularly Americans, keep pointing to Japan as a veggie utopia. If dead tropes were animals, a lot of these vegetarians certainly wouldn’t be swallowing them.

The same goes for cancer rates. Japan’s cancer rates aren’t low because they avoid meat. Japan’s diet is heavy on meat and soy – tofu, in particular – and soy can lower the risk of certain cancers. But tofu in Japan is usually served alongside meat, not in place of it.

Far from utopian, Japan is one of the least friendly places for vegetarians on Earth. Sure, you can get tofu at a convenience store, but that’s about it.

In Europe, my (now-lapsed) vegetarianism was unusual, but happily accommodated in every restaurant from Prague to Barcelona to London, Amsterdam, Berlin and Ghent. Koreans were happy to serve up Bi Bim Bap without steak, despite having a far more meat-dependant reputation than Japan.

So, be careful. Do your homework if you plan a trip to Japan – find vegetarian-friendly places in advance and choose a few alternatives. There’s no equivalent to just “ordering a salad.”

Or just ask for tonkatsu. Because vegetarians can eat pork, right?

Further Reading:
A first-person account of a vegetarian in Japan.
The photo of that meal in Kyoto was taken by Mara D’Angelo, my best friend and full-time vegetarian, who is extraordinarily gifted in matters of photo permissions.

38 Responses to On Being Vegetarian in Japan