This week: Japan, in five cats.

Cafe Cats
The best thing you can do before entering a cat cafe is to lower your expectations. Long considered top of my Japan to-do list, my first cat cafe – and all subsequent cat cafe ventures – whisked aside the dander of my illusions.

Cat cafes are modeled, probably unintentionally, on hostess clubs. You go in, pay for the time with a cat, then choose a cat. Food and drinks are mandatory and paid for separately or included in a package.

Unlike a hostess/host club, however, you can pursue different cats. Instead of $1000 bottles of champagne, you buy 100-yen bowls of tuna.

While a host actually puts some degree of effort into being charming, cafe cats are blatantly annoyed by your presence. They are not just lazy, they’re aloof. They get human affection when they want it, and you get the sense it’s from people way cooler than you.

Pet ownership in Japan is actually higher than ever. It’s just not easily available to everyone: Most apartments prohibit them, and most people work too many hours to take care of one. And Japanese apartments are small enough that they’d be street-legal if wheeled.

So you have an entire cat-worship industry: Bookstores have entire sections dedicated to cat photography, and you can buy DVDs of cats doing mundane cat nonsense (which have made Maru, a Scottish Fold, one of the few Japanese celebrities I can recognize):

Cat cafes depend on manipulating this yearning for the long-lost longhair; they do all sorts of manipulative, hostess-club-esque tactics to milk cash out of you. The most dubious is bringing out a bowl of tuna when you have just three minutes left in your time slot. You get 100 yen’s worth of tuna, and you’re surrounded by cats that were otherwise ignoring you.

Time flies and soon enough you’re into the next half hour, which you have to pay for, while  the cats go off to obscure corners of the cafe, leaving you with hair on your pants and a cup of melting ice.

Park Cats
The park by my house has a running track circling a lake. I run about 18k a week in circles, and while it’s a beautiful route, it can still get monotonous. To fight the boredom, I’ve devised an alternative measure of distance: I count cats.

The second run under the feline positioning system was a whopping 24-cat run. I’ve run 10k, but I have never topped the 24c. Generally the cats are sitting alone, but sometimes they’re in pairs. Some stare me down or casually stroll away, others squat in terror, look me in the eyes and jolt for the nearest tree.

Only after a handful of 10- and 12-cat runs did I realize they weren’t house cats or strays, but existed in a cat-identity netherworld: the park cat. The park cat is free, like a stray, but it isn’t a mangy emotional mess. They’re fed and groomed by park volunteers, two women and a man, usually in track suits with pet carriers and cat food.

The result is sort of surreal. Wild cats lounging in a park, completely accustomed to humans. It’s a testament to Japan. If you were to do this in America, some teenager would’ve set the cats on fire by now.

It also keeps the cats from hunting herons, attacking children, or clawing through garbage bags and spreading debris everywhere.

Those tasks belong to the Japanese crow, which has a three-foot wing span and no team of human volunteers dedicated to its grooming. (Contrarily, the crow explosion has led to blackouts, waste disposal problems and teams of volunteers who kill them with poisoned meat, as outlined in this unintentionally hilarious article from 2008).

Hang out at the park long enough and you’ll see a cat vs crow battle. Usually the cat wins, because Japanese crows are total pansies. 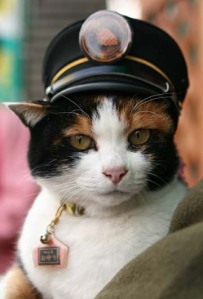 Station Cat
Tama, the station cat, is actually an employee of the Wakayama Electric Railway company, with the official role of “station master.” The cat got the job when the railway moved from manned to unmanned stations in 2006. They decided to give the cat a station master’s hat and feed it, because apparently just firing the old station manager wasn’t humiliating enough.

The cat actually did a pretty good job, watching over a 10 percent increase in passenger traffic in her first year at work. She is the highest-ranked female in management, which the railway company seems to think is pretty funny.

Japan’s population is aging, and positions are opening up. Someday felines will stand side by side with robots to fill the employment gap that Japan refuses to fill with Filipinos. I expect that by 2060, Japan will see its first cat in a helmet elected to parliament.

Actually, the first known domesticated cat in Japan – belonging to Emperor Ichijo, whose reign began in 980 A.D. – had a title and a job in the court. Her name (the cat’s) was the charmingly bland “Chief Lady-in-Waiting of the Inner Palace,” meaning she technically outranked two of the most famous poets of the era.

No research can confirm if she was the highest-ranked female in Ichijo’s court.

Shrine Cat
I live a few train stops away from the largest reclining bronze Buddha in Japan, and maybe the world. It’s surrounded by what is essentially a theme park of shrines, each dedicated to a specific task.

The most somber is the shrine for dead children, decorated with toys and pin wheels, while the least somber is the jaunty cat shrine, watched over by a handful of lucky cats.

People bring their cats to this shrine for a blessing. This isn’t unusual – shrines also offer blessings to cars – but I’ve never seen a shrine to canine pets, or to birds. 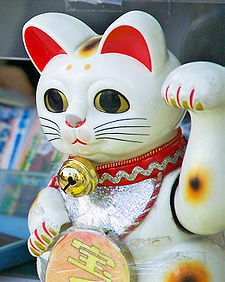 A cat licks its paw and rubs its face, making a beckoning gesture. This has a kind of lucky significance to the Japanese: It’s like the animal is telling you to follow it.

Animals don’t usually ask you to do stuff with hand gestures, so craftsmen captured the phenomenon in the famous Meneki-Neko (“beckoning cat”, commonly called “Lucky Cat” in English), a frequent fixture of restaurants in Japan (and Japanese restaurants in America) because it welcomes guests and brings in money.

Westerners see the beckoning cat as if it’s waving at them, but it’s saying “Hey, come here.” Japanese people have a different (and confusing) hand gesture for “come here,” which vaguely resembles a cat licking its paw and wiping its face. You hold up your hand and fold your fingers in. It looks a lot like our “go away” gesture.

The story goes that Oda Nobunaga, the 16th-century warlord who took over Japan before a samurai killed him (in retaliation for a noogie), was travelling when he saw a cat licking its face. Nobunaga went to the cat and evaded a trap that would have killed him.

Evidence suggests a less noble history of the Maneki Neko: Shortly after Meiji-era prohibitions on the display of phallus-shaped good luck charms outside of brothels, the red-light districts had to go a little more subtle to attract potential customers.

For a few years, this meant images of women making the beckoning gesture; but soon that was a bit too obvious. The women soon transformed into cats, and merchants of all stripes started using them for more above-the-board transactions, like sushi or candy shops.

The cat statues wear red bibs because, believe it or not, so did cats, back in the day. Wealthy families with cloth to spare would fashion little bibs to put on their cats, because it was totally adorable.

7 Responses to On Japanese Cats