On Running in Japan 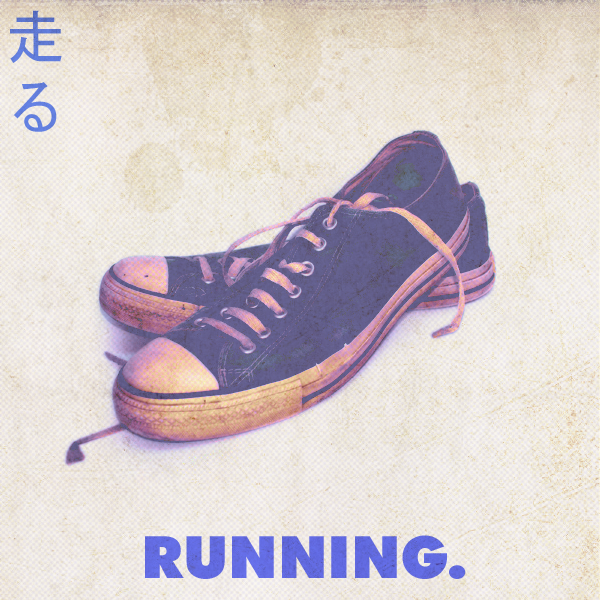 For the listener, who listens in the snow,
And, nothing himself, beholds
Nothing that is not there and the nothing that is.
– Wallace Stevens, “The Snowman”

Japan loves when you are polite and vague. Words like “probably” and “maybe” come so often that the nation is draped in an elegant and exhausting uncertainty.

All of this, according to American psychologists, is a recipe for anxiety. At least, for Americans.

The neurotic American tends to assume the worst. When we’re given responsibility over the mystery, we tend to brace for cataclysmic failure instead of more realistic outcomes. When we can’t say what we want directly, we aren’t expressing ourselves and feel that no one can understand what we need. We turn into 16-year-old goth clichés.

This made me want to hide in a bathtub.

I Can’t Stand It
I spent a lot of time in the bathtub watching the water rise as I inhaled and drop as I exhaled, sending steam into spirals as I sat sweating with a pastel-colored lamp shaped like an egg. It was meditation as relaxation – the kind of meditation you might practice at a spa.

I sat in the bath and breathed out my anxiety. Then I’d stand up, towel beads of water from my shoulders, and sleep. I’d spend the next work day bombarded with polite imprecision. I’d walk home from work and find my breath getting shorter.

Then I started running.

I bought a gray and green track suit inscribed with a slogan that would only be inspirational in Japan: “I do not try, and I do not find success.”

I wear this track suit with the only winter hat I have, which is part of a hamburger costume. So I look like Mayor McCheese on a fitness campaign as I run at a nearby track scaring off the cats.

I get to practice this over the course of 5-8 kilometers 1-3 times a week. Every time I put a foot in front of the other, I beg myself to stop. Then I ignore it.

Mindfulness meditation is about being present. I tried to practice with my eyes open. I’d sit comfortably, watch my anxiety float up and then remind myself that the anxiety was a story – that I was inventing my planet, then freaking out about it.

The problem with mindfulness meditation is that it’s boring. Everyone tells you that you should transcend that boredom, but frankly, the boredom made me anxious. And while I’m sure I could, eventually, liberate a million souls into enlightenment with proper training, I felt like the first priority was to stop freaking out about losing control over nearly every aspect of my life.

So, I ran. And I adopted my mindfulness practice into running.

I Found a Reason
Mindful Running – which ought to be the name of a new-age fitness bestseller – is entirely about controlling the story you tell yourself while running. In standard meditation, you let anxiety come and go but stay focused on the breath coming in over the ridge of your nose.

With running, it’s your entire body. Your legs are tired, but your brain says they are more tired than they are. You feel cold air sting your lungs, and tell yourself that you will run more when it is warmer. You feel out of breath and tell yourself you have to stop.

But you keep running.

White Light, White Heat
When I started running, I just sprinted. I’d assume that a proper workout meant pounding my lungs and heart into an exhausted mash for as long as I could. That’s what I’d call mindless running.

Mindful running is about pacing. You get better at pacing the more you practice, and you have to practice to understand pacing. Eventually you know how your legs need to move to sustain a long run, and you can push it harder or keep it slower, depending on the demands of the terrain.

I’ve learned to do this with my anxiety. Rather than fighting it until it bursts out into the hot water of the bath, I’ve started to look at my anxiety and devise a strategy for pacing my way to a somewhat more benign form of hysteria.

At the start of a run, you have all this energy. You feel like you need to sprint. But one of the hardest things to learn as a new runner is to refuse to indulge the temptation to burst.

From giving you a panic attack or low-level neurosis to making you think maybe you should stop running and go get some pastries, your brain hates everything about you and wants you to fail.

What your brain wants is to be safe, comfortable, warm and well-fed. Anxiety is your brain’s way of making sure you stay swathed in a down comforter eating chocolate ice cream in your apartment for the rest of your life.

Most of us don’t want that.

Train Round the Bend
So you need to practice arguing with your anxiety. Running is really just a prolonged series of arguments with the part of your brain that wants you to stop running.

I look forward to running now and in some perverse ways I have started to look forward to other sources of stress, for the same reason. It gives me the chance to practice. Now I see stressful places and people as opportunities to practice overcoming anxiety.

When you approach everything as a chance to practice, everyone becomes a perfect player. As you might choose to run a steep hill without giving into exhaustion, you might choose to have a difficult conversation without giving into resentment. Like a hill, they will be perfect even when they are terrible, because you get to practice. Hills, and people, are always playing their roles perfectly. Even when you fail, you get better.

Eventually, as you run, you stop being at war with your entire body. And if you allow yourself to practice, you will become mindful of the choices you are making with every step, in spite of every part of you giving you an excuse to stop – you can feel the difference in your clarity of thought.

Suddenly, you notice the herons reflecting on the still pond or the sun setting on lounging cats. For a series of ever-expanding moments, it’s not about your breath, or the impact in the knees or the crush of sneaker cushioning on your feet. The argument about that world outside you goes away, and you’re just there, moving through it, seeing nothing that is not there, and the nothing that is.

I shower, of course, but I haven’t had a bath in months.

And you’d better run, run run, run run to me over at the This Japanese Life page on Facebook.

This entry was posted in Uncategorized, Zen and tagged meditation, running, zen. Bookmark the permalink.

20 Responses to On Running in Japan