On Being Cute in Japan

“Battle not with Hello Kitty lest ye become Hello Kitty; and if you gaze into the abyss the abyss gazes into you with huge eyes and a helpless disposition.” – Friedrich Nietzsche

Everything in Japan has a face.

My city’s tallest skyscraper has a mascot: it’s the skyscraper with a face. My grocery store’s fish market has a cartoon fish looking concerned. Mops have faces – decidedly malevolent faces, perhaps to inspire confidence in their dust-fighting abilities. There are slippers with faces on the packages. You can even buy enormous plastic eyes with batteries that blink occasionally. The package encourages you to put them on your refrigerator.

Hello Kawaii
A Hello Kitty memorabilia collection rolled into the Fukuoka Asian Art Museum last month. I learned that Hello Kitty’s last name is “White” and her first name is “Kitty.” She’s as tall as five apples and weighs as much as three.

She was invented as a purse in 1974. Since then she’s been a motorcycle, an airplane, a bus, a coffee saucer, several ice cream bars (where you bite her cute little face off) and even kimono.

She is part of a broader embrace of cuteness in Japan called kawaii (rhymes with “Hawaii”). Kawaii casts a pretty wide net. It describes Hello Kitty, pink cakes and mops with faces, but also inept foreigners, fireworks and the Shinkansen (with or without a face). I’ve heard fresh bread described as kawaii and I’ve heard the word “kawaii” described as “the most widely used, widely loved, habitual word in modern living Japanese.”

The word goes back to The Tale of Genji, a novel written in the 11th Century by a lady who used it to mean pitiable, though these days it means “it makes me want to protect it.”

There’s a Japanese song that goes:

Kawaii is official governmental policy. Road barriers are shaped like dolphins, pink rabbits or friendly bears. Cities, prefectures and towns all have mascots. So do police stations. Street signs show cars squinting from pain when colliding with a bicycle (The bike remains expressionless).

The Root of Cute
Kawaii is childish and innocent, traits adopted for centuries by demure Japanese women long familiar with powerless roles.

In the 1970’s, schoolgirls started emphasizing this childishness in their writing.

Whereas Japanese writing came from a calligraphic tradition of dense, thick brushstrokes, schoolgirls started using a simpler method of writing characters. (Sexism also led to the hiragana alphabet and the “ladies dialect” of softened spoken Japanese, albeit hundreds of years before).

The new alphabet – dubbed “kitten writing” – wasn’t just dotting “i’s” with hearts. It was literally transforming every character into a cutesy, unreadable picture: Kitten faces, tiny trees, cherries, birds, caterpillars. This style worked its way into the entire kanji alphabet and soon enough no one knew what the girls were writing.

Kitten writing also involved the use of English – often deliberately childlike, incorrect English – to add some hippy glamour. The result of this particular trend has not gone well for Japanese signage or T-shirts abroad.

The weird thing is, no one knows how it started. There was no magazine, pop star or television show linked to it. It was a spontaneous, nationwide revolution of girly handwriting that had to be banned in schools after 55 percent of the nation’s young schoolgirls started using it.

In its day, Kitten Writing was a subversive thing: It attacked a bedrock of Japanese tradition, calligraphy, and created a secret language that divided children from adults. Students learn kanji by rote repetition, the patience and discipline required to master it is the foundation of the educational system.

As a counter-cultural movement, kawaii lasted about a year before being usurped by marketing agencies. Kawaii writing started appearing in window displays and advertisements; to this day, the crayola-and-cut-out look is a staple of Japanese advertising.

Hello Again, Kitty
Which leads us to Hello Kitty. Sanrio was the first to exploit the kawaii craze, forming Kitty White out of the ashes of Japanese schoolgirls’ notebooks like a cutesy golem.

Hello Kitty was small, pitiable, foreign (She lives in London) and has the rounded, childlike shape of Kitten writing. It may have helped that a popular slang term for sex at the time was “nyan-nyan-suru,” or “to meow-meow.”

Put on a purse in 1974, Hello Kitty created an unstoppable wave of anthropomorphic insanity. This wave moved a weird pastiche of French and Victorian-era fashion and architecture, the bastardization of the English language and the personification of every known mammal into mainstream culture.

All the Lonely People 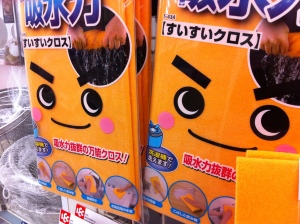 Men are just as interested in being kawaii as women. Some high school boys go so far as to shave their legs, wear barette’s in their hair and keep stuffed toys hanging from their school bags. But grown men embrace it as well.

In her amazing essay, “Cuties in Japan,” Sharon Kinsella theorized that Japan’s embrace of cuteness stems from the epidemic of Japanese alienation; lonely businessmen enjoy the feminine feeling of pink toiletries with a girlish presence. Not because they substitute for women, but because they make it feel like a woman is around.

On a subconscious level, alienated men feel comforted when their mops have eyes.

“Cute style,” Kinsella says, “is anti-social style, because it is pre-social style.” In other words: Being cute means being socially awkward, which means you don’t have to carry the burden of any other social responsibility.

Which is, of course, infantalizing: When everyone presents themselves as helpless, you end up with a lot of people who are legitimately helpless.

The Unbearable Cuteness of Being

In English, “cute” is something pleasant that lacks the depth and power of real beauty. Beauty requires willpower, mastery, effort; these things are missing from the simplified cartoon imagery of cute. Cute doesn’t elevate or challenge, it soothes.

But all the fruits of effort and willpower and mastery are rude to boast about in Japan. You’re supposed to deny your achievements out of humility. Becoming cute and helpless – rejecting your own authority and power – isn’t just acceptable, it’s mandatory. And so one of the many meanings of kawaii – synonymous, perhaps, with “vulnerable,” – is emotional vulnerability, or speaking without affectation, acting as free as if you were a child.

Japan loves the cute because the cute has no skill to boast about, removing the complicated routine of broadcasting one’s humility and just being whatever one happens to be. When there’s nothing to hide, you don’t have to pretend.

That’s why Hello Kitty is ideal. We all want to be a slightly winsome, adorable mammal-child free from the burden of expectations.

When you stare into the abyss, a giant floating cat head stares back.

If you like chocolate cupcakes with cute kittens who never become cats, you’ll love liking This Japanese Life on Facebook. And if you like this post, please share it! I don’t have ads, so my only payment is likes, shares, plus one’s and retweets. YOROSHIKU!

13 Responses to On Being Cute in Japan